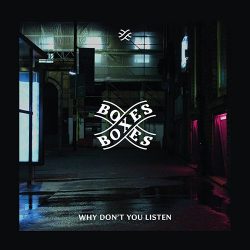 Boxes are a four-piece Manchester-based band that, having played their way around most every venue that their home base has to offer, are now hoping that the release of their debut EP ‘Why Don’t You Listen’ will help bring their music to a wider audience. Their music has the rather specific aim of having the characteristics of country-rock whilst remaining true to their northern roots.

These country rock influences are clearly revealed on the opening track. ‘Electric Lights’ features some decent guitar work and is very much at the rockier end of the genre. Although this is the band’s choice as the lead single from the five-track EP a more obviously commercial sounding choice may have been the next song, ‘Bad Bones’. With a memorable intro and oft-repeated guitar riff that brings the sound of the likes of Aztec Camera to mind, this is the stand out track on this collection. If lead singer David Mitchell Miller’s vocals can sound a little strained and unremarkable at times on the EP then ‘Bad Bones’ is where it used to greatest effect.

The mood and pace of the songs tune down a notch for the remaining tracks, each given subtle shades of variation through Miller’s approach to vocals. On ‘Let Me In’ for example he takes his voice to a much higher place and, with some decent harmonies on the chorus, lends the track a completely different feel to those opening tracks.

The constant throughout is the quality of the guitar work on offer. Each track affords them a chance to shine, both as integral parts of the song’s rhythm and feel but also in the few seconds of solos that can be found on most tracks. The lovely closing title track is a perfect example of how this approach can work to great effect. It is a moody, melancholy sounding piece of music, seemingly a world away from the opening track in its approach but it probably showcases the band’s talent and potential at its best.

The EP has two distinct stand out tracks and, if the remaining songs don’t quite match up to these, this remains a decent debut from Boxes that will hopefully bring their sound to the attention of that sought after wider audience.

Manchester based band spread their wings