Nashville singer-songwriter Diana Jones has announced a new album ‘Song to a Refugee’ which is due out April 24th on Proper Records in the UK, followed by some UK dates in May and June. Acclaimed for earlier albums inspired by the almost mystical connection to her birth family and the music of rural Tennessee, Jones is known for giving voice to dispossessed people from the past, and the new album finds Diana looking into the wider world to shine a light on current issues close to her heart.

Produced by Grammy Award-winning producer and musician David Mansfield, who also plays multiple instruments on the record, special guest artists on the record include Richard Thompson, The Chapin Sisters, Jason Sypher on bass, Glenn Patscha on piano and Will Holshouser on accordion. The single ‘We Believe You’ was added lastly with the help of Steve Addabbo (Suzanne Vega, Shawn Colvin) producing and guest artists Steve Earle, Richard Thompson and Peggy Seeger each singing a verse, Mark Hunter on piano and Joe DeJarnette on bass.

The story of how the album came about really begins in 2016-17 when Diana was recovering from a serious illness caused by a gas leak in her apartment. Although her health was improving, artistically Diana felt at a loss. She had written no new songs due to her illness and she felt overwhelmed by the prevailing political environment. Diana found the harsh realities of what was happening at the US-Mexican border particularly distressing; scenes of mothers separated from their children resonating with her own experience of being adopted.

She explains “The devastating election of 2016 had left myself and many of my artist friends unable to respond creatively. During the spring of 2018 I landed back in New York after a tour with no new songs. I had admired Emma Thompson’s work as an artist and a humanitarian forever. After randomly bumping into each other twice in a park near my apartment we had a long lunch and Emma told me about her work and her work as president of the Helen Bamber Foundation. I don’t think anyone could have called me out of my writer’s block the way Emma did and I began to write the stories that I found so devastating, one voice at a time. My own need to “re-humanise” the people who were being de-humanised by governments and the press resulted in a flood of songs.” 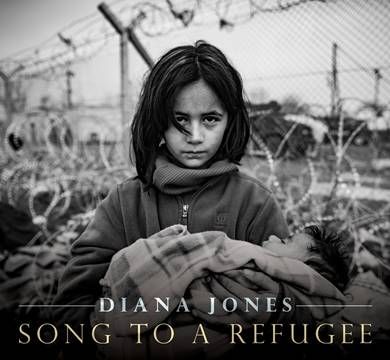 Diana continues, “The work has everything to do with my own need to connect with others around this important issue. At concerts I invite a spokesperson from a local refugee organisation to speak during the intermission and the audience can ask questions and find out how they can help. I’ve watched people get involved immediately.”