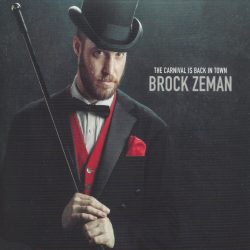 Canadian musician Brock Zeman has had an excellent career and shows no sign of slowing up his output with his thirteenth release, the highly ambitious ‘The Carnival Is Back In Town’. 10 years in the making the album has already been scrapped once but Brock decided that it was worth taking a chance on and teamed up with multi-instrumentalist Blair Hogan and drummer Dylan Roberts alongside a number of other talented musicians, to have another go at bringing his carnival to life and it was well worth both his time and the obvious effort that went into creating it.

Concepts albums are always difficult for a number of reasons, the first is that there has to be a cohesive narrative throughout and the second is the risk of potentially alienating the listener through a lack of relatable material depending on the subject matter. Luckily, on ‘The Carnival Is Back In Town’ neither of these points relate and what we get is a superb story full of interesting characters with very human and relatable traits.

Throughout the record, Zeman manages to masterfully combine interesting storytelling and a surprisingly deep analysis of these fictional characters, the most blatant being on melancholy highlight Drinks (The Clown) with great instrumentation, all of which was recorded solely on acoustic instruments to preserve the feel of the period the story is based. The instrumentation is more often than not, a continuation of the sound of Zeman’s previous releases however, the sound changes depending on the mood of the song whether it is at times experimenting with a more theatrical or vaudevillian sound or at other times more sombre, the album is continually interesting and takes you on a journey through its many twists and turns, just like the story does with the characters. This aspect of the record, as ambitious as it may seem, never sounds out of place and fits seamlessly with the vibe throughout and is a glaring example of the boundaries that can be pushed within the genre with great musicians and a great vision. Of course, there are good old fashioned Brock Zeman songs like the intense The Moon Ain’t Full and the album highlight Closer To God which are relevant to the narrative however, they seem to angle much closer to more personal tracks than the majority of the character-based record.

This is an album that requires time and attention to really listen to the story itself, to get to know the characters and to enjoy the experience from opening track ‘The Carnival Is Back In Town’ to closer ‘The Carnival Has Left Town’ there isn’t a dull moment. Brock Zeman has produced a superb album and it really is a shining example of how to do a concept album right.