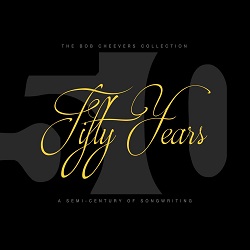 In recognition of a half century of songwriting Bob Cheevers has pulled together a comprehensive 5CD, 83 song retrospective which covers, it’s claimed, ten genres of music, and taking a mix of songs from his albums as well as some unreleased recordings. I’m not completely sure what the ten genres are meant to be but country, western, folk, popular jazz, blues, rock, and singer-songwriter are all represented here on this ten track sampler. What it reveals is a hugely accomplished songwriter, and an idiosyncratic singer in the Willie Nelson mode.

What’s a typical Bob Cheever’s song? Well, whether it’s a huge sweeping song like The Unknown Soldier or a shaky handheld camera fly-on the wall documentary piece like Lime on the Rim, what it will have right at its heart is a narrative. There are people in motion, things happen, the world turns and the sun comes up again. Perhaps the thing that Bob Cheevers is the best at, though, are the songs that sit you down by a campfire while he regales you with tales that cut across the years, telling the history of an event or of a place. The song Fifty Years is his own story, a lifetime in music set to a folky accompaniment as his worn and cracked vocal states his hopes for the future “fifty years, fifty years, fifty years I’ve been paying my dues / what I’ve learnt and what I’ve earned another fifty years singing the blues”.

This is an honest selection, including as it does Island in Paradise – a perfectly good song which is made almost unlistenable by the heavy-handed eighties style production. Here’s one that needs re-recording with just a guitar, maybe just a little more accompaniment than that, but certainly a lot less than the version on offer. This is a blemish on a perfectly good peach, a few seconds with a sharp knife and it’s gone leaving behind a ripe fruit to be savoured. How does anyone write a line as good as “My guitar wants to be a tree again / part of the earth in-tune with the wind”, and tie this to some gorgeous guitar harmonics ? Or produce as fine a banjo driven song as Is it ever gonna rain which audaciously, and casually, couples a farmer’s plea for his crops to be watered to a potential harvest of love following the musing “yeah I think I’ll drive on into town find the courage and maybe tell her I was wrong” with “she knows I need her love washing over me the way I need the rain falling softly on my fields”. There’s a lesson to any aspiring songwriters here: if you’re going to do country, then do it this well – or just don’t bother.

Other standouts include the rocking Texas is an Only Child, a celebration of the history, geography, and musical scenes of the Lone Star State. The equally strident Unknown Soldier is a great song in the “my buddy went to war, never came back” tradition with some stinging phrases “some call him a hero a soldier to the end / he came home to Alabam’, now I’m a dead man’s friend”.  Amongst all these though the finest is kept for last – Old Soul. It’s something along the same lines as Jimmy Webb’s Highwayman, and surely in some alternate universe there’s a fondly remembered super-group called the Old Souls. This is a soaring tale of humanity from the Garden of Eden to the construction of “four rocket ships, one for each horseman of the Apocalypse”. With hippy hand drums, searing guitar and a perfectly matched vocal, and fading out on disquieting overlapping voices and the sounds of unfolding doom it is a true epic triumph of a song.

And this is just the sampler – the full box set has a multitude of other delights.

Sampler from a career long retrospective ably demonstrates Bob Cheever’s abilities as a songwriter. And then some.