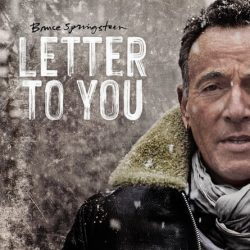 The arrival of a new Springsteen album is always a much-anticipated event. However, the news that this particular release was to feature the full E-Street Band and that it had been recorded live in the studio with minimal overdubs – not since ‘Born in the USA’ in 1984 had that happened, has seen interest in ‘Letter to You’ reach even higher levels of expectation than usual. Even a single listen to the record quickly establishes that despite a remarkably consistent level of output over twenty studio albums, Springsteen has produced something very special here, something that deserves to be filed up there besides ‘Born to Run’, ‘The River’, ‘Nebraska’ and ‘The Rising’ as amongst his finest achievements.

Some time has now elapsed since the passing of Danny Federici (2008) and Clarence Clemons (2011). How to deal with those losses, musically as well as emotionally, is something that Springsteen has taken time to come to terms with. 2012’s ‘Wrecking Ball’ saw Tom Morello introduce some fire into the Boss’s usual heartland rock sound and there was also some experimentation with loops and electronic sounds. This was followed by ‘High Hopes’ in 2014 again featuring Tom Morello and revisiting old songs and covers. Both records featured previously recorded contributions from Clemons and the latter Federici as well. Both were excellent albums. However, there was a sense that with his old friends no longer around Springsteen was looking to explore new ideas but couldn’t quite find it in himself to cut those links with the past.

Throughout his Broadway shows and even accompanying the release of ‘Western Stars’ there was talk of a new E-Street Band album. The resultant collection is an unashamedly fan-pleasing return to the classic Springsteen & E-Street Band sound. It would be easy to dismiss ‘Letter to You’ as backward-looking, retrospective, or even playing safe but that would be churlish and rather missing the point. ‘Letter to You’ is Springsteen, now 71, taking stock and looking back, but also ahead. All the old E-Street Band relentless energy and wonderfully worked arrangements are present. Present too are the familiar sounds of Roy Bittan’s piano but also significantly, the keyboards and the searing saxophone solos that were the trademarks of Federici and Clemons. It feels like Charles Giordano (organ and keyboards) and Clarence’s nephew Jake on saxophone have, through their live performances, earned their place at the table. The result is a familiar sound but with a new freshness and invigoration. The Boss has arrived at the moment where he feels ready to go back to the future.

The new fresh live sound of the E-Street band frames the album, but as ever it is Springsteen himself that paints the pictures inside. The songs are also in some ways trademark, with references to downtown trains, small towns, rivers, etc. However, where in the past Springsteen has often highlighted the lives and issues of others, this is a far more personal album. Its main themes deal with loss and mortality, reflection, and even a bit of nostalgia. As well as the loss of Federici and Clemons, in 2018 Springsteen lost George Theiss with whom he played in his first band The Castiles. ‘Last Man Standing’ recalls those days in the 1960s and reflects on the fact Springsteen is now the only surviving member. “Out of school and out of work, thrift-store jeans and flannel shirts, the lights go down as you face the crowd. The last man standing now”. The theme reappears in ‘Ghosts’ where Springsteen sings “I make my vows to those who’ve come before…meet you brother and sister, on the other side”.

Three of the songs on the album come from the 1970s but have never seen the light of day before. Possibly held back to avoid all the ‘new Dylan’ comparisons at the time ‘Song for Orphans’ and ‘If I Was a Priest’ fit nicely with the E-Street vibe and it is only the slightly long-winded lyrics that betray their origin. ‘Janey Needs a Shooter’ has come close to appearing on more than one previous Springsteen release and is the strongest of the three. It has been played live in the past and widely bootlegged. The song has also been featured as ‘Jeannie Needs a Shooter’ on Warren Zevon’s 1980 album ‘Bad Luck Streak in Dancing School’.

Given all that has gone on in America in recent times, the album contains little in the way of political comment. Only ‘Rainmaker’ ventures into such territory with a thinly disguised reference to Trump as the ‘Rainmaker’. Opening up with “Parched crops dying ‘neath a dead sun, we’ve been praying but no good comes” the song goes on to say that “Sometimes folks need to believe in something so bad…they’ll hire a rainmaker” but that ultimately “they don’t care or understand, what it takes for the sky to open up the land”.

Stylistically ‘Letter to You’ is the Springsteen of past glories, but it is also the perfect Springsteen album for now. On his twentieth studio album and having become a septuagenarian, the Boss has produced a very personal album celebrating the past and reflecting on loss and mortality, whilst at the same time still sounding like he’s having a ball. In the absence of a live Springsteen show any time soon, where these songs would have sounded great, an album of such stunning quality is very welcome indeed.

The Boss goes back to the future with stunning new album