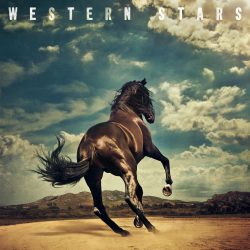 The lone traveler sticks out his thumb and his journey begins. Across the country he hitch-hikes, catching rides from family men, truck drivers, muscle car owners and the like, listening to their stories and situations as he moves from town to town. So begins ‘Western Stars,’ the most densely cinematic Bruce Springsteen album since ‘The Rising.’

Produced by Ron Aniello – who helmed both 2014’s ‘High Hopes’and 2012’s ‘Wrecking Ball’– and including contributions from Patti Scialfa, Jon Brion, David Sancious, Charlie Giordano, Soozie Tyrell, and more than 20 others,  ‘Western Stars’ takes us on a journey alongside Springsteen’s wayfaring hitch-hiker through an America unconfined by time or era, though it harkens back to before we were all glued to our phones: taking in and interacting with the landscapes, wide open spaces, small towns, and people we meet along the way.

The narrator is not always in motion, however. The ebullient ‘Sleepy Joe’s Café,’ which floats atop lively horns and zydeco accordion, and the minor pop masterpieces ‘Tucson Train’ and ‘Sundown’ find us not on the journey, but either waiting or longing for a lover to return from theirs. Yet then there’s ‘Chasin’ Wild Horses,’ where we’re back on the move and running from a memory.

Musically rich with orchestrated soundscapes that recall the sweeping scores and productions of Phil Spector, Jimmy Webb, and Lee Hazelwood among others, ‘Western Stars’ layers acoustic and steel guitars with melodic flourishes of banjo in places, reminiscent of the lush arrangements that defined the Nashville Sound and early ’70s pop/folk singer-songwriters such as Harry Nilsson and Danny O’Keefe.

Springsteen is in fine voice throughout.  Consider the glorious ‘There Goes My Miracle,’ where the boss reaches for the rafters, hits notes that are downright Orbisonian, and then conjures up a commanding, almost whisper-like subtlety on a possible nod to current Americana, ‘Somewhere North of Nashville,’ which recalls both his ‘Devils and Dust’ and ‘Ghost of Tom Joad’-era solo work.

No stranger to writing for films, from ‘Streets of Philadelphia’and ‘Dead Man Walking’ to ‘The Wrestler’ – Springsteen’s gift for rich character studies within four minutes is what keeps Hollywood calling – ‘Western Stars’ and ‘Drive Fast (The Stuntman)’ address with empathy the lives actors and stuntmen lead beyond the glitz and the tabloids, revealing them as human and as vulnerable as the most working-class of Springsteen’s subjects.  Indeed, the narrators of both tracks approach their careers as matter-of-factly as his factory workers, drifters, and dreamers.

Closing with ‘Moonlight Motel,’ a beautiful elegy for a long-past relationship that may or may not have lasted for more than a night but its memory forever lingers, ‘Western Stars’ stays with you long after its final note fades, proving that Springsteen, like Frost, still has many miles to go before he sleeps, and plenty left in the tank, just in case you may want to hitch a ride.