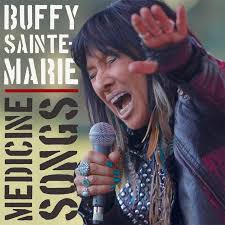 With an identity and profile assured of a life beyond the vagaries of the next release, Buffy Sainte Marie continues to strengthen her over 50-year reputation as a fearless songwriter who challenges prejudice and injustice at every turn. ‘Medicine Songs’ reinforces this image as it contains not only new songs but reworkings of her classics that quietly display the length and strength of her career. And it ain’t over yet as evidenced by her 2016 Polaris prize-winning album ‘Power in the Blood’.

So what does ‘Medicine Songs’ feature? The oldest song is the Donovan classic cover ‘Universal Soldier.’ Many will not appreciate that this track originated from this proto-feminist civil rights activist. Here it is rendered pure and features a beautiful cracked vocal. ‘Bury My Heart at Wounded Knee’ is a song about uranium land theft from the Nixon era which is in turns rocky and ragged. ‘Little Wheel Spin and Spin’ is a highlight with its glorious guitar motif, as is ‘My Country ’Tis of thy People You’re Dying’ with its savage indictment of the treatment of indigenous peoples in Canada and the Americas. A powerful artist still at the coal face and still worth a listen.

Age does not wither an impassioned artist