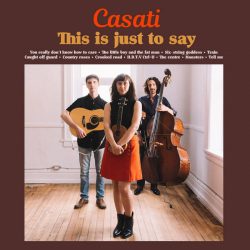 Casati, Canadians from Manitoba, started off as the Grace Hrabi Trio in 2014 playing Jazz standards and this is their second and latest album. The name Casati derives from “The patron saint of infinite variety the Marchesa Luisa Casati who fearlessly followed art across every style and medium” and the band hope to match that approach with their classically trained musical background, seeing themselves as a ‘folk trio with an open mind’.

Band members include Grace Hrabi on Ukulele and Auto-Harp, Jesse Popeski on Guitar, Quintin Bart on Double Bass and Hurdy-gurdy. All three share vocals and songwriting credits which on this disc focus on their experiences travelling, singing and playing across Canada over the last two years. Their intention whilst recording the album was to emulate a typical performance, intimate and live with no overdubs – and they do so very well.

The vocals and harmonies are a delight. The band’s view of its performances as a synthesis of country ballads, ’50s and ’60s pop harmonies and jazz and classical instrumental virtuosity is borne out to a great degree. There was, though, a point when I hoped that I might hear more than strummed guitar and ukulele.  Not to say that there were not more interesting instrumental interludes, the lyric-less ‘Train’ for instance, but there was a sameyness in some of the album that needed a little relief. With such great voices on tap perhaps it might have been nice to hear a track or two performed acapella? I’m a great fan of acoustic bass which can bring such warmth to any music and would have liked to hear Bart’s instrument more to the fore. All that said, being able to hear the CD version on a decent system did help to open out the subtleties of the music – it certainly grew on me.

Proceedings start with ‘Crooked Road’, a commentary on our troubled times, “Blood for Oil is what I hear them tweet” but “I do believe we can keep our heads”. Things move on with ‘This is Just to Say’ which asks for forgiveness after a rocky period between partners – with the promise that things will get better: “Lately / I have been impatient with you / Been spending time in our room / I hear the TV through the wall”.

‘Tell Me’ and ‘You Really Don’t Know How to Care’ (which at times has a Do-Wop feel), offer further relationship observations. Favourite track is ‘Six-String Goddess’ which offers an apology to an instrument presumably pawned for a period of time with the promise that the owner will be back soon; a lover gone away for a while but promising to return. It’s a dryly funny lyric and one of the most adept on the album.

You would almost certainly love to see this trio live in a small scale environment with a glass at your side.  There’s a fresh openness to their singing that feels like a spring breeze. I would be hopeful that they develop some more varied musical ideas, which may come with time. That is not to say there is anything wrong with the quality of the playing; these are relatively minor quibbles and I am never a great fan of the ukulele for that very reason.

I am trying to think, for reference, who or what Casati might be compared to – vocally Hrabi is reminiscent at times of Gillian Welch. Musically, perhaps a less intense Hot Club of Cowtown, if not quite so swing orientated.  Have a listen, see what you think and make your own judgement. I don’t think you will be disappointed.

Lovely vocals from an acoustic trio with a warm feel