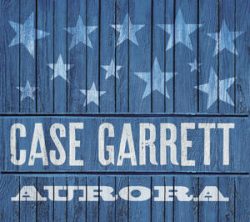 Born in Missouri, with an itinerant upbringing, Case Garrett has taken a long road to get to the point where he is able to release his debut album. Playing music before he reached double figures and in his own band by the age of 10, Garrett soon fell into a familiar mix of music and alcohol. With the early death of both brother and sister from ‘drinking and such’, and with a young son to support, he turned back from the brink and found a bedrock in his music.

Although settled now just outside New York, Garrett credits time spent in his youth in Louisiana and Tennessee for much of his musical outlook and Aurora definitely has its feet planted firmly within country music. Garrett has surrounded himself with some established Nashville talent and the opening track What Can I Say allows the fiddle of Jenee Fleenor and Michael Douchette’s pedal steel to drive a scene setting piece of honky-tonk.

Fleenor’s fiddle is the thread that runs through much of the album and is showcased in a more mournful and hauntingly sad fashion with Long Way Down in which Garrett references the bottle that took his siblings, a fate that he, in his own words, ‘escaped by the skin of my teeth.’  It is a big change of pace from the opener but is classic country in both lyric and mood.

Going Down To Mobile gets the album back on the up-tempo country twang road with two versions, one a fiddle driven track while the album closes with an alternative mix where electric and acoustic guitars take the lead. Both versions are worthy of inclusion but with only eight tracks on the 32-minute album, these two included, it does tend to leave the listener feeling a tad short changed.

Garrett is a multi-instrumentalist who takes credit for all words, music and arrangements on the album with the exception of the JJ Cale track Call Me The Breeze which features some brilliant guitar work. This track also features the vocals of Clara Lofaro who adds her talents to great effect to harmonise with Garrett on Fill’ Er Up.

If music was the driving force in bringing Case Garrett back from the brink then he has used his love of that music, particularly his Tennessee influences, to deliver a lively piece of country as his debut.