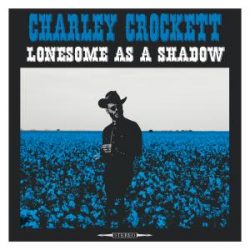 Like his famous ancestor Davey, Charley has certainly not taken the easy route to success having spent years hitchhiking and busking in the US and around the world. He then toured extensively throughout the US, gaining a reputation as a formidable live act as audiences grew. From there he recorded an album that paid tribute to his favourite Country and honky-tonk songs that gained critical acclaim and saw him likened to the likes of Bill Withers, Dr John and, of course, Hank Williams.

‘Lonesome as a Shadow’ was recorded in Memphis at the  Sam Phillips Recording Service with production by Matt Ross-Spang.  Recorded as live in the studio, backed by his band, The Blue Drifters, Crockett has created an album of original material that pays homage to his influences which are largely the sounds of Texas and Louisiana, alongside the Memphis Soul sound. Quite a range of styles that all seem to sit together snugly and present Crockett as the fully rounded distiller of the whole range of American Roots.