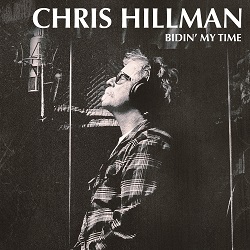 Chris Hillman, the bluegrass mandolinist turned electric bass player, was a significant player in several seminal bands of the sixties and seventies. None more important than The Byrds, but Manassas ran them a close second. His work with The Flying Burrito Brothers with Gram Parsons was, of course, uber-seminal to the burgeoning country-rock movement – The Gilded Palace of Sin was an outstanding landmark by anyone’s measure. Later on Chris Hillman achieved what was probably his greatest success with the straight country of The Desert Rose Band, but in recent years his recorded output has been in the arena of solo albums. Previous releases have varied in style, with the gospel bluegrass of The Other Side only really enlivened by a rerecording of Eight Miles High whilst Like a Hurricane was a stronger rock orientated album with the stand out song I’m Still Alive featuring an appearance by David Crosby.

Bidin’ My Time sits closely alongside these earlier releases. Produced by Tom Petty it opens with a Byrds classic – the Pete Seeger penned Bells of Rhymney – with Crosby providing harmony vocals, it’s truly “folk-rock” opening as a folk tune before John Jorgenson’s guitar takes it off in a rock direction. The title track is a country-rock recollection with Hillman looking back on life and long friendships, his vocal warm and lyrical whilst the tune holds an echo of Jesus Gave Love Away for Free from Manassas days. There’s more Byrds nostalgia on the beautiful She Don’t Care About Time, a song so perfect that no matter how many times it is recorded the magic that Gene Clark created is never diminished. Roger McGuinn appears, at last, adding guitar on Here She Comes Again, a co-write with Hillman from the McGuinn, Clark & Hillman band which, unsurprisingly, sounds distinctly like a lost McGuinn, Clark & Hillman outtake recording. New Old John Robertson successfully reshapes the Byrds song into a sprightly bluegrass song.

Symbolically the album is almost a full Byrds reunion – Hillman, Crosby, McGuinn performing, and there’s a Gene Clark song. That the first three named couldn’t quite manage to record together on at least one track is a regrettable truth – particularly with the perspective added by the recent demise of Tom Petty – who’s Wildflowers closes out the album. If there was ever a more striking reminder that Time is no-one’s ally it’s hard to recall. At least, however, Petty – with the able assistance of Benmont Tench and longtime Hillman collaborator Herb Pedersen – managed to coax out of Chris Hillman what is his best and most consistent solo album.

Latest flight by original Byrd is a satisfying journey through his past – made strangely and unexpectedly poignant with the death of producer Tom Petty.