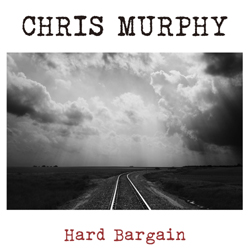 Americana UK featured Chris Murphy’s video of the title song from this album a while back and if you liked the video then you’ll love this album. Raised in Hudson Valley, New York, a place with a rich musical tradition, Murphy is an accomplished fiddler who draws inspiration from various sources – bluegrass, swing, folk and jazz along with world music. He cites musical magpies such as Ry Cooder, Richard Thompson and David Lindley as his heroes and on this album, recorded live and featuring just him, his fiddle, voice and foot stomps, he roams throughout a stirring set of raw energy and unbridled fun.

Opening with the stirring Celtic tinged Caves Of Killala his sonorous amplified fiddle delivers an overture that is mystic and powerful before he breaks into the melody. It’s a lengthy song and it takes some time before he sings but once he does it’s as if he’s transformed the venue, in Boise, Idaho, into a hoolie.  The title song follows with the audience now clapping along as Murphy sings of hard times growing up, his fiddle sawing and rasping away as he comes across like a New York version of Frank Turner. From there on in he see saws between Appalachian like hoedowns such as Ain’t No Place and Holcombe Creek which are real crowd pleasers with his fiddle skirling away and more personal songs with Friend and Prevailing Winds prime examples. His pizzicato work on Friend and particularly on the word salad murder mystery Bugs Salcido is exemplary. Meanwhile he delivers something of a tour de force on White Noise which again opens with his fiddle arching into the rafters before he delivers a stirring concoction of images that are somewhat opaque but suffused with peril singing,  “sound and fury, dark is the night, search and destroy, it’s just white noise.” Midway through he unleashes a fiddle solo that would have the Devil heading back to Georgia with his tail between his legs.

It may be hard to imagine that a live album of one guy and his fiddle might be worth more than a listen or two but Murphy delivers here with the album quite visceral at times. John Hartford could fill an album with songs like these so if you’re into fiddle music that’s not too straitlaced then you should seek this out.

Barnstorming one man and his fiddle