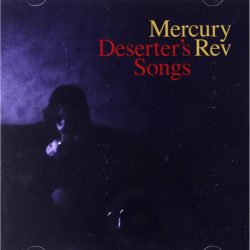 ‘Deserter’s Songs’ was released in 1998 by Mercury Rev, a band who appeared to be down on their knees expecting to be counted out.  The band had escaped to the Catskills to record their fifth album and were on the verge of imploding.  They needed to bring in a new drummer, the manager left, and the bandleader Jonathan Donohue was depressed.  Their previous releases only hinted at what was to come on this record.  ‘Deserter’s Songs’ was borne out of troubled times but ended up being one of the band’s most coherent, beautiful collection of songs they have released to date.  The album sounds timeless and effortless but has enough rough edges (scattered throughout) to allow the listener to find something new every time you hear it.

‘Holes’ sets the tone for the album as it unfolds delicately, threatening to become more unhinged in the middle before the song ends with the line “bands, those funny little plans that work quite right” before fading away. Many of the songs on the album seem to be about endings but are sung with wry wonder rather than resignation or bitterness.

‘The Funny Bird‘ sounds most like earlier Mercury Rev, channelling something similar to their chaotic first album with its noisier, psychedelic approach. Donahue again references his views about being part of a band  with the line “in the end you are just a band, a funny little bird that never lands.”  ‘Delta Sun Bottleneck Stomp‘ brings the album to an end with a spirited fast-paced stomp which was likely influenced by their involvement with the Chemical Brothers at that time.  Donohue declaring “waving goodbye, I’m not saying hello” before the remainder of the song dissolves into ambient dissonance.

This cosmic Americana album cries out to be listened to in one sitting as a complete piece of music.  The songs sound like lullabies set to a waltz at times, widescreen epics (‘Goddess on a Hiway‘) at other times.  ‘Deserters Songs‘ was the album that saved Mercury Rev and was rightfully critically lauded by the music press at that time ending up on many top album lists.  The production on the album, the guests (including Levon Helm and Garth Hudson adding drums and sax), the bowed saw, female voices, classical instruments and Donahue’s high vocals created this epic symphonic classic which deserves all of the love and admiration it has earned.