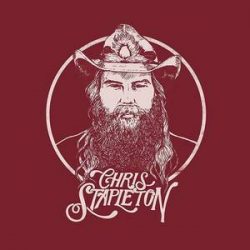 When I was asked to write a review about a classic Americana album, I myself had one main issue. As someone who is only 19 and who really found their way into Americana music through country music, I don’t have the extensive back catalogue that some of my fellow reviewers do when they are tasked with the same thing.

Thus I decided to stick with my routes and go with the extremely controversial, ‘is he or isn’t he Americana’ star Chris Stapleton. And the album in question, his most recent- ‘From a Room: Volume 2’. (An honourable mention must go to ‘Volume 1’, which has one of my favourite songs of all time in ‘Without Your Love’). In all honesty, you’re about to witness an argument as to how an album which has only been out for 3 years can be considered a classic.

Now interestingly, the album begins and ends with a cover, the former being a cover of the Kevin Welch classic ‘Millionaire’, a beautiful love song about how it isn’t money that makes the narrator rich, but the love he receives and can give out. Stapleton’s take is brilliant, using the effortlessly beautiful vocals of his wife Morgane to create a true masterpiece.

When a song starts with a riff as amazing as the one on ‘Hard Livin’’ you know you are going to be in for a treat. The song has this brilliant rock vibe to it and was even played by Stapleton when he was the musical guest on Saturday Night Live. I’m not sure what’s better from that live performance: the song itself or Sturgill Simpson taking one line and making it completely incomprehensible.

I’ve been lucky enough to see Stapleton twice live and the thing that strikes you is the sheer amount of sound he and his band makes, despite only having four people on stage. This results in a brilliant rendition on one of the standouts of the album- ‘Midnight Train to Memphis’. Here we see Stapleton liven up one of his old folksy songs from his time as part of the Steeldrivers, a song which really cements him as an Americana star.

Quite simply, the album has everything and utilises the mesmeric skills of Stapleton and his band. There are few people with a more spectacular voice in the world right now and it feels amazing to experience the different parts to the album, be it the slow and powerful ‘Nobody’s Lonely Tonight’ or the jovial and family song of ‘Friendship’. The album truly encapsulates the diversity which Americana has to this day and the fact that it is still in the UK Americana Charts today, for me makes it a truly classic Americana album.