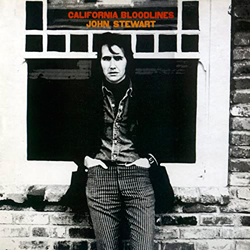 It’s February 1969 and while Woodstock is yet to happen, the sixties have peaked, psychedelia is a busted flush and Dylan and The Band are leading a return to more traditional American music. Dylan in fact is recording ‘Nashville Skyline’ and in the studio across the street, John Stewart, a folk singer who has spent six years with The Kingston Trio, is recording his first proper debut album with his producer, Nik Venet slyly stealing players from the Dylan sessions as he pulls in favours.

Stewart had recorded an album with his wife Buffy Ford in 1968 but it sank without trace. Venet, a bit of a whizz kid at the time (reportedly he “discovered” The beach Boys and produced Fred Neil, Karen Dalton, Glen Campbell and Linda Ronstadt), was given the job of producing this one. Familiar with Stewart and a big fan he persuaded him to come out to Nashville reckoning that the pickers there would bring out the rawness of Stewart’s songs. With most of the selections recorded in one take, after Stewart ran thought the song so they could get their charts together, Venet’s decision was inspired.

Having written ‘Daydream Believer’ for The Monkees, Stewart had proved his writing chops but ‘California Bloodlines’ far outstrips that ditty as he delivers a set of songs which are romantic and yearning, underpinned by the spirit of pioneering and the American dream. The songs span a bridge between Greenwich Village folk and the nascent Texas scene with whiffs of both Fred Neil and Guy Clark to be heard within the grooves. The westward ho drive is captured in the sublime title track which opens the album with a wonderfully delicate ripple of acoustic guitars and harmonies while the blissful joy of ‘July You’re A Woman’ (with its wonderful key change) is perhaps one of the best combination of road and love songs you will ever hear. Almost baroque folk in its delivery, ‘She Believes In Me’ is one of the last flowerings of sixties troubadouring and ‘Missouri Birds’ has some of the tremulous grandeur one expects from Jimmy Webb.

At the heart of the album are a set of songs which paint a picture of an America fading away by then. ‘Razor Back Woman’ with its churchlike organ is like a condensed Flannery O’Connor tale but it’s the astounding ‘The Pirates Of Stone County Road’ which really delves into a mythical past. On paper the song might seem to be sentimental but Stewart’s performance gives the song a hefty lift as he nails childhood nostalgia. ‘Mother Country’ is the centrepiece as Stewart narrates a tale suffused with American pride played by a taut and gradually swelling ensemble which is just astounding. According to Stewart in an interview with Zigzag magazine, his tale of a dying man’s wish to have one last ride on his favourite horse was given an extra emotional boost by his assembled Nashville pickers as producer Venet had made up a story that the song was actually about Stewart’s recently departed father.

The winsome ‘Omaha Rainbow’ – aside from being the inspiration for an excellent music magazine in the seventies –  is a swell slice of country rock not dissimilar to Mike Nesmith’s outings at the same time and is dedicated to Ethel Kennedy, Bobby Kennedy’s widow, Stewart having campaigned with Kennedy in 1968. Finally, there are a couple of rambunctious outings. ‘Shackles And Chains’ rattles along like a freight train on fire and the closing ‘Never Going Back’ has one of the liveliest pedal steel solos ever, played by Lloyd Green. Inspired, Stewart says, by the spoken word credits at the end of the movie ‘Fahrenheit 451’ (directed by Francois Truffaut), he name checks all the musicians as the band jams on, a great end to a grand album.

Stewart had a lengthy career releasing several albums in a similar vein to his debut before finding unlikely chart success in the late’70s with a couple of glossy albums  featuring global superstar chums, Stevie Nicks and Lyndsey Buckingham. It was a short lived fame however and he retired to his songwriting folk roots. Opinions vary as to what his best album was but they all focus on the early career and for this writer it’s ‘California Bloodlines’ which comes up trump.