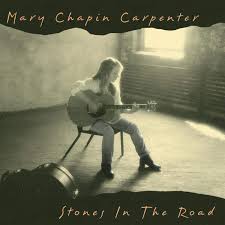 Mary Chapin Carpenter can be credited with bringing this reviewer out of the musical wilderness that was his post teenage decade; the 1980s. Struggling to identify with anything remotely described as popular at the time it was through the USA leaning Bob Harris and Paul Gambaccini that my ears were alerted to the what was going on that side of the pond and I realised that my early leanings towards Eagles and Jackson Browne were pointers I should have paid more attention to.

By the time that Mary Chapin released ‘Stones in The Road’ she already had four albums under her belt, each one more successful than its predecessor and bringing her songwriting talents to an ever expanding audience. Since that debut in 1987 Mary Chapin had gradually moved away from an overtly country sound into something much more aligned with what we now know and love as Americana.

That debut was produced by John Jennings and by the time they arrived seven years later with ‘Stones’ the pair had perfected their craft, delivering a typical Mary Chapin Carpenter album with a mix of soulful, affecting ballads sitting comfortably alongside more up-tempo and oft played tracks such as ‘Shut Up And Kiss Me’.

The title track is classic Mary Chapin, beautifully crafted and sung, it was written as a reminder of the role models that she grew up with in the 60s. A message to the current generation that the principles of men such as Martin Luther King and JFK should not be forgotten and instilled in each subsequent generation. It is a sublime piece of songwriting and imagery that remains, over thirty years later, a warning against selfishness and greed “We pencil in, we cancel out, we crave the corner suite, we kiss your ass, we make you hold, we doctor the receipt.”

If, as the years have gone on, Mary Chapin albums have perhaps moved more and more toward the reflective and melancholy, then this was the album that perfected her craft in that regard. Track 8 ‘The End of My Pirate Days’ through to track 13 and album closer ‘This Is Love’ is as good a run of songs as any she has ever produced either before or since. Including her interpretation of the real life story of a deaf and blind teenager found wandering the streets of Jacksonville in 1945 ‘John Doe No.24’, the songs are so lovingly and carefully constructed, sung with a warmth and feeling that is uniquely Mary Chapin Carpenter, that the listener feels emotionally bereft by the album’s end.

We are all, when describing our classic albums, unsurprisingly biased in the way we lavish our praise onto these works of art. But Mary Chapin Carpenter is a master of her craft and remains so to this day. ‘Stones in The Road’ was my entry point to this genius of singer-songwriting and I am eternally grateful to Messrs Gambaccini and Harris for the signposting.