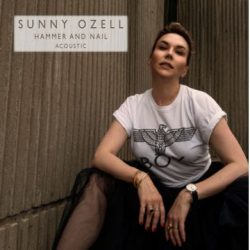 Ozell’s album, ‘Overnight Lows’ witnessed the first airing for four of the tracks on this EP , to which has been added a cover of the Los Lobos track, ‘The Valley’. These tracks, recorded at  The Village recording studios in Santa Monica  are given an acoustic sparsity that whilst creating a feeling of space also generate particular atmospheres; what Ozell herself describes as a “Coffee House Take”.

The first track, ‘Hammer and Nail’ is inspired by the Staple Singers song of the same name; the lyrics suggesting that political change is hard-won and may not be effected by just taking a defiant stance. There is more subtlety afoot than defiance, however, as Ozell’s vocals, whilst presenting a shimmering surface, also suggest a deeper vulnerability that lies beneath. The fiddle on the intro suggests that things are teetering on the edge, there could be a turmoil of emotion about to be released, that defiance alone may not protect. It is hard not to liken the regular rhythm of the track to a hammer at work, trying to break through, adding an added layer of tension to the track’s sense of foreboding.

‘Driving Highways’ has a hesitant undercurrent, brought about in part, by Ozell’s vocal quality but also by the drums which give a feel of treading carefully in case things fall apart. Pain and loss may have taken place, the world may be unkind but somehow strength can be found to carry on and make a stand; the fiddle on this track skilfully reflecting these sentiments through its evocation of warmth and sadness tinged with a glimmer of hope.

‘Comes and it Goes’ provides a driving, incessant rhythmic backdrop, giving Ozell’s vocals the opportunity to shine at middle and upper registers, whilst she sings of the reality of relationships in all their messy glory, where feelings don’t start and finish with clear outlines and people can be attractive some of the time but not others. The hook of the chorus will have you addicted before the end of the track making you want to press play one more time.

‘In the Garden’ shows a gentle reflective side of Ozell’s talent giving prominence to her silky vocals. Though generating a tranquil feel, some of the lyrics suggest there may be some bitterness brewing and that this is not simply a reflective look back at a failed relationship: “We weren’t ready, but who is? / You aimed an arrow for my heart but you missed”.

‘The Valley’ has a wonderfully spacious, almost ethereal feel created by the loose drumming, measured use of piano chords and spiraling melodic- line led by the fiddle. Ozell’s vocals are warmly augmented by backing vocals on the chorus on a song that maybe a hymn to the dawn of civilisation and a cry for what we have lost.

A collection of songs that deserve careful listening, ‘Live at the Village’ will unfurl before you over time, revealing its complexities, contradictions and humanity.

Complexity, contradiction and humanity meet to give an atmospheric soundscape