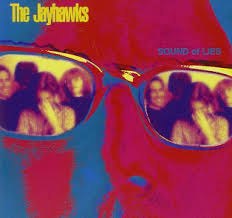 In the winter of 1996 The Jayhawks were still ostensibly reeling from the departure of Mark Olson the supposed key writing partner of Gary Louris and certainly one of the figureheads of the band. The brace of albums that preceded 1996’s ‘Hollywood Town Hall’ and ‘Tomorrow The Green Grass’ were rightly lauded as genre-defining with their swooning harmonies, sharp songwriting and almost spiritual melodies so where would they go from here? Or even where could they go from here?

The short answer is they upped the ante in spectacular style with a collection of songs released in April 1997 that drew most of their themes from the personal crises being endured by chief songwriter Louris whilst also giving head to two other members of the band to pen some of their best material. Opening with the stately ‘The Man Who Loved Life’ all the markers were carefully placed. Crisp full production with each instrument sounding full and clear, harmonies and counter harmonies, haunting melodies laced with melancholia and lyrics barbed with double meaning. ‘Think About It’ follows on again couching the narrative in plangent guitar and layers of harmonies with the occasional counterpoint of feedback and rumbling rhythm guitars. It’s almost loud, quiet, loud, and quiet but nowhere near the grunge template. This is only the essence but never had such raw guitar come up against exquisite melody in such a way before. This is Perlman’s first co-write of the album and as such stands against any Olson/Louris composition. The track ends with a soaring guitar solo and the kitchen sink is thrown in there too before fading to a single voice.

‘Trouble’ arrives quietly with a stark devastation as Louris sings his simple almost country lament before the track takes off as the harmonies pile in and in a Beatlesey twist the song almost becomes a duet before Louris’s perfect broken-hearted keen takes the strain. Instrumentally driven by the piano, a lone guitar lyrically provides the bridge until the final coda involving Louris singing of his desolation over the picked guitar of the intro. If melancholic introspection had a YouTube link it would take you straight to this track.

‘Up To You’ lifts the mood with its jaunty instrumentation but this hides some sharp and uncomfortable lyrics that peel away the wreckage of a marriage. ‘Stick In The Mud’ heads towards Neil Young ‘Ambulance Blues’ territory. A sombre beat and a forlorn vibe as again Louris shines a light on his pain ‘Begging you please don’t leave, you’ve got me down on my knees, begging you please don’t leave’. The piano of Karen Grotberg really shines here and it is clearly one of the major backbones of the album – full of longing and regret and played with such a sweet tone. Side one ends with the rocker ‘Big Star’ its joyous harmonies hiding the bitter lyrics and their feelings of aspiration meeting reality head-on.

One of the key elements of this album is sense of sonic adventurism that it has compared to previous Jayhawks albums. Perhaps Louris has been influenced by his growing friendship with Jeff Tweedy, they had certainly released Golden Smog material a year or so before. All of the songs contain many melodic switches and several parts crossing between one melody and another whilst all the while driving the song forward, counter harmonies which join the lead vocal and spin away to create a background. Instrumentally things are adventurous too. Rolling pianos, effects-laden guitars, violins, strings, Wurlitzers, vocal effects, feedback and even the addition of another vocalist in the form of Matthew Sweet. The second half album is even more exciting, as if the confidence has been growing, ‘Sixteen Down’ , ‘Haywire’ and ‘Dying on the Vine’ represent some of the most eclectic and diverse colours on a ‘country’ rock palette this side of ‘Yankee Hotel Foxtrot’ as each song is a carefully constructed collection of sounds and focuses; From the stentorian beats of O’Reagan’s drums to the haunted shards of feedback on ‘Sixteen’; the sumptuous guitar stylings and ebb and flow of the harmonic narrative on ‘Haywire’; the urgent paranoia of Perlman’s bass line and psychedelic spits of the guitars and violin on ‘Dying’- and an extraordinary trio of songs.

The original album finishes with three songs that slowly unfurl like flags of surrender after the anguish of the previous three. ‘Bottomless Cup’ highlights another songwriter in the band as Tim O’Reagan marks everyone’s card. Again filled with melancholy and regret atop strummed guitars with no keyboards in evidence for the first time in the album. It’s noticeable! Then ‘Sound of Lies’, the title track written by Louris and sung with a cracked voice – the voice of a broken man. It’s simple, harmonious, downbeat and browbeaten. In later edition of the album this was the last track and it works as a complete picture of the journey before. The story is done, the author broken and tired. The string arrangement is sublime lending the song a sense of Drake in its sadness.

But the original album has one more ace up its sleeve and I would urge listeners to seek out the original European copy of this album as it contains as the last track ‘I Hear You Cry’ – a jewel of a song that distils the whole album and places Grotberg’s piano at the centre of possibly the best melody of an album chock full of them. There are hints of Motown here and the perhaps the stylings of Isaac Hayes in its production.

So there it is. If you do not own this album buy it now. It is their finest hour brought about by desperate heartache. There is sublime beauty here as well as the most affecting music, consummate musicianship, superlative songwriting and the production (also by the band with Brian Paulson) is second to none. What are you waiting for?

1 thought on “Classic Americana Albums: The Jayhawks “The Sound of Lies” (American Recordings, 1997)”