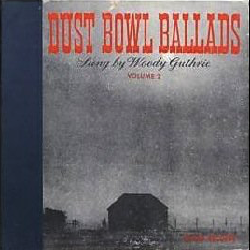 Celebrating its whopping 80th birthday this year, Dust Bowl Ballads remains a prescient and relevant piece of musical reportage and remarkably unique. Woody Guthrie hailed from Oklahoma, settled in Texas, but made his mark in New York. He is well-known for his travels around the South-West in the 1930s, reinterpreting the blues of the area as a new folk troubadour. In this, his first work, he wrote about the plight of the people affected by the dust bowl, a series of droughts and dust storms that swept across the Southern Plains. It is a comprehensive 14 tracks, each one detailing a different aspect of the troubles. Lung and health ailments, buried tractors, refugeeing, crime, poverty, deaths, it is all laid out quietly and matter-of-factly.

With simple guitar, catchy melodies, clear honest lyrics, and perky harmonica, Dust Bowl Ballads is a timeless and accessible album. Guthrie sang it as he saw it, and would continue to paint a picture of America over another 8 studio albums until his death in 1967. With levity and humour, Guthrie made the plight of those with “Dust Pneumony” with lyrics like “Yeah, there ought to be some yodelin’ in this song, but I can’t yodel for the rattlin’ in my lung” known. Those who lost their homes and farms and travelled hungry across America are described and illuminated “Yes, we ramble and we roam, and the highway that’s our home. It’s a never-ending highway, for a dust bowl refugee”. Despite the depth and sadness of the subject material, the album is playful and cheerful in tone, allowing the social commentary to come across as fun and informative rather than preachy or militant.

The lasting effect of Woody Guthrie can be felt across the folk and country genre even today and can be summed up by Bob Dylan in his tribute:

“Hey, Woody Guthrie, but I know that you know
All the things that I’m a-sayin’ and a-many times more
I’m a-singin’ you the song, but I can’t sing enough
‘Cause there’s not many men that done the things that you’ve done”