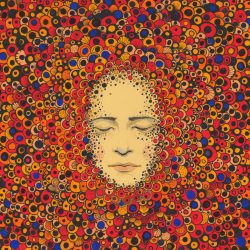 ‘The Art of Loneliness’ is an ambitious album from London-based Mock deer, also-known-as Ricky Damiani. The sound is fuller and more expansive than earlier EP releases and Damiani’s writing has grown during the long period leading up to this first full-length collection. The songs are personal, emotional commentaries on a range of themes, from human connections and the isolation that can result from the way we use social media through to Damiani’s reflections on death: “Come with me // Into the sea and shed no tears no // Just outstretch your fingers and let go.”

The album opens strongly with the atmospheric title track, which feels like an intimate conversation. Damiani’s voice is clear and controlled throughout the album and this song is a good example of its effectiveness. The song builds and, after a short pause, is elevated when he sings: “…and the world has gone to shit,” introducing a tense electric guitar and more impassioned singing. You sense that he really means it. This is followed by the rhythmic piano of ‘The People and the Places’, on which Damiani experiments with pauses in the instrumentation, followed by changes in pace, volume and melody. This approach is repeated throughout the album and could risk feeling disjointed if not handled skilfully.

The highlight of the album is the single, ‘Twisted Forms’. There is a more immediate, ear-friendly melody and instrumentation is layered and builds over gentle percussion as Damiani explores isolation, anxiety and displacement; feelings brought on following his move to London. Like many of the tracks, it features high-quality backing vocals that both lift and add depth to the song. ‘Fire in the Mountain’, coming in at over six minutes, is a more epic affair, again allowing Damiani to play with changes in tone, pace and vocal style. These first four songs are the heart of the album and make for an engaging, intense listen.

The remainder of ‘The Art of Loneliness’ is fairly consistent and continues to play with song structure and instrumental breaks that punctuate winding verses. Throughout, the main strength is Damiani’s voice, which is beautiful at times and always emotionally engaging; the songs frequently feature delicate vocals that burst into life at satisfying moments. On ‘Into the Night’, Damiani sings: “You pour your heart out into a song but it don’t make no difference to your situation.” Whether or not it makes a difference, there’s certainly plenty of heart here and the album grows with each listen.