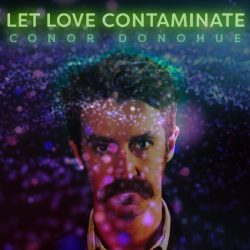 “Typically, the best albums are the ones you have to work at to get into”  Conor Donohue said back in 2012, when he was promoting his first solo album ‘Sway’.  Fast forward seven years in the career of this US singer-songwriter, and Donohue’s third and most recent album, ‘Let Love Contaminate’, which sits somewhere pleasantly indefinable towards the jaunty, tune-humming end of the Indy folk-rock spectrum, is a real case in point. For one thing, the lyrics on ‘Let Love Contaminate’ aren’t the typical Americana paeon to some semi-mythical, probably over-rated, rural or small town existence.

Rather, Donohue says the album was greatly inspired by his relocating from one big city to another –  Charleston to New Orleans, the latter famous for a nightlife “which is completely celebratory and debaucherous [sic] at times. I find a lot of joy and a lot of struggle with that as well.” Or as he puts it on the album’s second – and arguably most incisive –  track, ‘The Garden’: “sometimes I go out stumbling in the middle of the night, through the broken beer bottles in the street, they glitter and glow underneath my bare feet.”

The whole of ‘The Garden’, in fact, feels like it could pull you away from the usual Americana comfort zones, despite the first full half of the track consisting of Donohue’s gently lilting folksy guitar criss-crossing with  memories of his family as he lies  “sipping on bleach and gin, just like my sister did before, when she couldn’t find the opiates she adores.”

Then abruptly,  there’s a thud of a bassdrum, the full band and a heavenly chorus and Donohue himself suddenly combine forces, and we’re ripped off our feet into a full-blasted, rock’n’roll rebel finale. “Don’t tell me how to be young”, he and his chorus line roar again and again over the gale-strength backing music  — and indeed, after the headily upbeat, tub-thumbing rocker of ‘Smells Like Gasoline’ that follows, complete with a bellowed-out classic “1-2-3-4” intro, you hardly feel you need to.

The central part of ‘Let Love Contaminate’  hurtles along at the same, immensely engaging, nearly-out-of-control-but-not-quite high pace, with ‘Getting Better’ another thunderingly uplifting and ragged-edged mid-tempo anthem, all scrunchy guitars and heavenly choirs, and given a rock solid backbone with an infectiously doo-wap chorus. Then there’s space for two manically  energetic, earthy ballads, ‘Milk, Blood and Traffic’ and ‘Lost Weekend’   – the latter  classic “rock-a-swing”, as Ringo Starr once memorably called it, with its chirpy piano intro, smooth dance hall pace, slivers of brass band accompaniment  and even some Beatles-like close harmony backing vocals for good measure.

It’s only in the last two tracks where things sag notably.  ‘White Noise’ sounds weirdly like an industrial rock parody and whilst ‘Terrified Moon’’s lyrics are right up there with the general urban fin-de-siecle feel of the album, the energy levels on this perilously long, lone guitar-based piece seem to be spluttering dangerously low.

However, if you skirt these last two musical equivalents of dodgy alleyways, just like in New Orleans or any big city, on the rest of ‘Let Love Contaminate’ there’s always a great party going on somewhere. Just don’t look in the usual places.