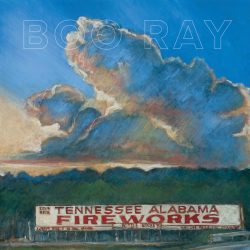 There’s a wide billboard on the side of interstate 24 headed westbound pointing the way to Tennessee Alabama Fireworks in Marion County, TN.  That’s a thing in the southeastern United States:  big fireworks’ stands, truck stops, motor inns, convenience stores, gift shops – practically little towns – resting on or near the borders between states.  (The one on I-95 at the North and South Carolina border is famously known as “South of the Border” and displays a giant sombrero-wearing mascot named “Pedro,” with billboards along the way that read “Pedro says ‘chili today, hot tamale!’” But I digress…)  The image inspired the artwork and title for ‘Tennessee Alabama Fireworks,’ the most ambitious album to date from country-rocker (and North Carolina native, oddly enough) Boo Ray.

Kicking off with steel guitar and harmonica over a phase-shifting guitar rhythm, the six-minute tour de force ‘A Tune You Can Whistle’ sets the scene as a stomper that musically could’ve been on Waylon’s ‘Dreaming My Dreams’ while lyrically addressing the state of the union and boasting a rhyme that includes benzodiazepines.  Score a point for outlaw country.

Boo Ray is concerned about the direction of America, but not in any overt political way; it’s more philosophical, moral, mystic, and well, cosmic.  There’s a dream-like tint that runs through ‘Tennessee Alabama Fireworks’ – and not just because of the progressive haze of tracks like ‘Honky-Tonk Dream’ and the pedal steel-powered ethereal instrumental ‘Dee Elle’ – it’s a free-wheeling trip that takes you back to the glory days of the Armadillo World Headquarters, of cowboys and hippies uniting and letting their freak flag fly.  ‘Don’t Look Back’ urges the freedom of the open road – free from cell phones, partisan bickering, and 24-hour-news saturation, while ‘We Ain’t Got the Good’ slides across the dancefloor like nostalgia night at Gilley’s.

Though Ray’s voice can sometimes be a touch too reminiscent of Kid Rock’s and the chorus of ‘Outrun the Wind’ suffers a tad from its modern country phrasing and rhyme scheme, it’s hard to ignore ‘She Wrote the Song:’ a powerful statement detailing a relationship with a pain-pill addicted partner – while watching it happen and being powerless to stop it.

On the lighter side, ‘Gone Back to Georgia’ is a horn-heavy Southern-rocker that marries the prime Kama Sutra days of the Charlie Daniels Band with the freeform swagger of mid-period Black Crowes.  ’20 Questions’ is a hilarious soul-drenched, fist-pumping sing-along.  But Ray saves the best for last.  ‘Skin & Ink’ is the type of clever lyric that used to be commonplace in Nashville but now stands as a major achievement.  A pickup-line extended into a new barstool anthem, it could be used as foreplay for bikers, tattoo enthusiasts, and outlaw country artists alike.  Put that on a billboard and watch the fireworks.