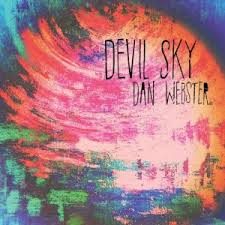 Dan Webster is a UK singer-songwriter who has embraced the Americana tradition in an impressive way. His fourth album release ‘Devil Sky’ has just emerged and is a ten song, full band album of interesting and superbly produced songs. Previous releases have garnered excellent reviews and BBC Radio 2 airtime and there is no indication that this won’t continue apace now.

The album opens with ‘Playing Cards in Late Night Bars’. This is an upbeat song that signposts what will follow. Tuneful, expertly played and produced with an accessible arrangement and overall sound. Harmonies support and instrumentation is never overpowering. This must be a live highlight as well.

The pace and delivery vary throughout the record. Halfway through ‘Haul Away’ shows how delicate songs can sit alongside foot-stompers to great effect. This is an album highlight. ‘Nothing at All’ is a heartfelt and sad love song. It showcases a ‘less is more’ approach to arrangements that is both confident and effective. Lyrically the songs are personal. There are family links, relationship stories and snapshots of American influenced life. ‘Joe’ strays into darker territory to great effect and stands out well. A touch of politics is present in ‘Freedom in Suburbia’ which could be developed further, but overall the words do draw you in. This is a clean and atmospheric record that fits seamlessly into the Americana genre.