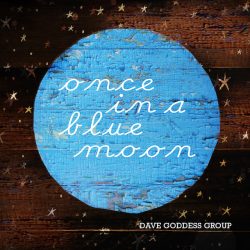 In an era where recorded music is often overproduced and over-engineered to within an inch of its life, it’s a joy to listen to an album that has been recorded with the minimum of studio wizardry and one where the musicians genuinely seem to be having fun and really enjoying themselves. With ‘Once in a Blue Moon’ Dave Goddess Group has that aspect of the process well and truly nailed and Goddess explains the rationale. “For me, the biggest challenge these days is not to make my recordings sound too perfect, with all the technology available, you can make the tempo precise and all the performances flawless. You can auto-tune the vocals. I think it’s important not to be seduced bythese possibilities, because in the end, your track will have no spirit and you’re left to try and figure out why it sucks.”

Co-produced by Goddess himself, along with Konrad Carelli, ‘Once in a Blue Moon’ is full of a sort of joyous spirit and it most certainly does not suck!  This is the band’s first full album since ‘Something New’ hit the shops back in 2012 (although there had been 3 pretty decent EP’s to keep his fans happy in the interim). This is almost certainly the best release so far and it sits squarely in rootsy/rock space and as this review slowly crystallised there was a nagging familiarity that took a couple of weeks to fully float to the surface and then it slowly dawned that the comparison was with early Willie Nile and specifically from his 1980(!) self-titled debut.

That it stands comparison with that great effort is testament to the quality of ‘Once in a Blue Moon’.  That’s not to say this is simply a clone and listeners will draw their own conclusions on artist comparisons.  Goddess has that world-weary, almost gruff type of voice that lends itself so well to these blue-collar type of songs. There’s no pretence here, just good quality music and highlights include the slower-paced ‘Chinatown’ with its theme of hope and redemption, the inspiring ‘Volunteers’ with its plea for humanity to increase personal participation to help address the everyday issue facing us all and the title track ‘Once in a Blue Moon’.

Dave Goddess himself captures the essence of this album, “We’re nothing more – but certainly nothing less – than a rugged, road-tested, absolutely authentic rock and roll band. We want to lift people up with our music—make them think and feel. We want them to have fun and be inspired. If we continue to do that, I think there will be an audience that will always be eager to follow.” That sums it up just about perfectly!