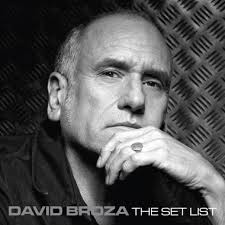 The stalwart of Isreali musical co-operation and advocacy David Broza has spent his entire career trying to encourage dialogue and co-operation in a land where intolerance is common currency and oppression is a way of life.
This is a retrospective of a 40 yr plus career which has included being a UNICEF goodwill ambassador and performing with everyone from Jackson Browne and Townes van Zandt to the Palestinian rapper Muhammad Mughrabi and Steve Earle.

As such it is a tricky beast to review featuring as it does several styles all inflected with a Middle Eastern flavour usually poured over a classical guitar. Several tracks are not in English so despite enjoying the melodies examination of the lyrical content is somewhat difficult. Tracks featuring guests such as the Shawn Colvin number Shotgun Down The Avalanche are far more accessible thanks to the language being sung. They are generally fairly standard MOR/folk songs again with much classical guitar colour.

Patently a force for good and a consummate musician, this album should serve as a decent introduction to the work of an obviously decent man dedicated to doing good.