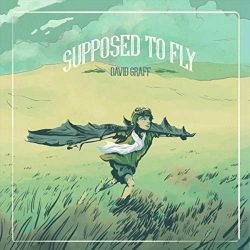 After some early success, David Graff turned his back on the music industry in the late 1990s and began a career as an artist. However, the urge to create new music never left him. ‘Supposed to Fly’ is Graff’s first album this century. Although he started his musical career as a drummer, Graff soon took up singing and song writing in order to satisfy his creativity. Indeed, it is his singing, full of character and experience – a distinctive storyteller’s voice, that is the most notable aspect of this new release.His vocal style is gritty and emotional, with a good range and an ear for a catchy, sometimes unexpected melody.

The opening track, ‘Blue’, begins with a high-pitched, tuneful vocal, immediately introducing us to Graff’s voice. It is a mid-tempo song about an emotionally damaging relationship. It is one of the strongest songs, drawing in the listener to the recurring themes of familial and romantic love. The subject of love is approached directly but does not become too sentimental or saccharine thanks to Graff’s appealing openness and clever phrasing and lyrics. For example, in ‘The Only One I Got’, a song for his daughter (who co-produced the album), Graff sings: “…you’re the last thread in my coat / The only one who shares my blood / you’re every song I ever wrote.” In ‘Vapour Trail’, Graff sings wearily of a failed relationship: “We cast no shadow, we left no mark.”

There’s plenty of variety in style, pace and tone, with a number of simpler country-rock tracks providing some upbeat drive as a contrast to more narrative, reflective pieces. However, it is when the music slows and leans towards a folk-style that Graff is most effective and the strength in his voice comes through. Highlights include the gentle ‘Watch Over the Ones I Love’ and the title track, ‘Supposed to Fly’, which includes lots of narrative detail. The listener can easily relate to the theme of looking back over life, reflecting on the hopes, dreams and plans that faded away: “I was supposed to fly up to the sun / I can hardly walk now and I sure can’t run.”

The songwriting is solid and Graff has a pleasing instinct for using a variety of instruments to good effect. For example, the horns and pedal steel blend beautifully in ‘Watch Over the Ones I Love’ and the banjo and organ enhance the distinctive ‘Tough City’. The piano flourishes and singalong style on ‘Home’ and the strings and harmonica on various songs are good examples of how musical layers enrich the sound.

Although the second half of the album is a little less striking, there’s enough here to captivate and enjoy. Graff’s delivery is strong throughout. He sings: “There’s a lot of love left in my bones,” and, now he’s rekindled his passion for music, it seems there’s a lot of songs left in those bones too.