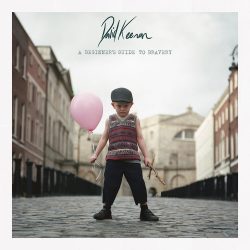 This is not a beginner’s guide to anything. From the outset it’s clear that David Keenan is an accomplished singer, nay poet, who is confident in his style and ability. Every song on ‘Beginner’s Guide to Bravery’ bursts with emotion and Keenan gives his all throughout. Keenan hails from a small Irish county town called Dundalk, just south of the border with Northern Ireland. Many of the songs on this album feature stories about the town’s imagined (and occasionally real) past.

If we were to try and categorise Keenan, there are definite parallels with Damien Rice’s songwriting and slightly broken vocals, but at the other extreme we are reminded of the unusual, dramatic delivery of someone like Patrick Wolf or Scott Walker.

What Keenan does impressively is paint pictures of the stories he tells. At times, listening to the tracks is like watching a film. In ‘Love in a Snug’, he illustrates the bar vividly through his lyrics “can you hear the clicking of boot heels on bar stools, and see the bald chalk-less tips of the pool cues, and the three-bar heater that is gasping for air?”

Lyrically, this album is a beautiful mix of colloquial phrases and poetic observations. The stand off between the two is not jarring, rather it showcases Keenan’s intelligent observations. Within ‘Unholy Ghosts’ there’s everything from “Car lights knife their way through the dark” to “pyrotechnic rhymes” and the inability to read a letter from Christ because “my glasses were filthy”.

There’s humour in his words too. On album opener ‘James Dean’ he imagines how the star’s life might have panned out, “I had a dream that James Dean was alive and well today, looking for the quiet life, working for Irish Rail”.

In terms of musical style, about 80% of the album is stripped back to focus on acoustic guitars with occasional fiddle playing – placing it squarely in the Irish folk tradition. So, when a song comes along like ‘Tin Pan Alley’ that features piano instead, it really stands out. But that is to undersell what’s going on here. The instrument to take note of is Keenan’s voice. He carries the songs on a journey. He sets the tempo, he sets the emotion. And he sets the bar high. Part spoken, part whispered, part screamed, this is powerful stuff.

The album closes with ‘Subliminal Dublinia’: a powerful call to revolution with a crowd chorus singing “occupy the city with original ideas” over and over. Keenan rises to the occasion layering the song with rousing lyrics: “a revolution of the mind and of the soul and of the heart”.

Immersive yourself in the powerful poetic folklore of David Keenan - just don’t expect to leave unscathed.