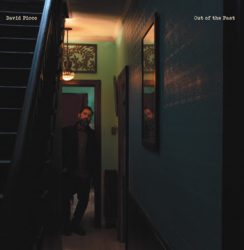 David Picco’s new album ‘Out of the Past’ draws on influences from Tom Petty and Bruce Springsteen – with an added rockabilly edge to the alt-country sound: what some listeners might describe as heartland soul. The ten tracks of his fifth, self-produced record cover more intimate areas than his 2015 album ‘Start Again’, but with a rootsy and harder vibe.

The album opens with ‘Down The Road and Gone’, a rock-infused country song with echoes of The Velvet Underground. It’s a tune about the life of a touring singer, which makes you want to listen to the rest of this independently recorded release right there and then.

One of the many stand-outs on the album, ‘Born Too Late’, looks at a phrase that most of us have said at some point: “I was born in the wrong generation” – mainly having a joke when watching a TV show or a movie. The happy sounding guitar and piano intro takes the feeling/idea/concept about being born too late for things Picco wants to see or be, but with a lighthearted twist, which is demonstrated in humorous lyrics like: “maybe I was meant to be doing tricks for kings and queens in a castle by the sea”.

Standout songs include the country ballad ‘See You Around’ and ‘Nowhere to Run’, in which Picco explores his more vulnerable side. But probably best of all is the title track ‘Out of the Past’ about two close friends of Picco’s who passed away recently. It’s the longest song on the record at around seven minutes with an epic, Springsteen-esque arrangement. It’s also the perfect album closer with strong vocals and great use of pedal steel.