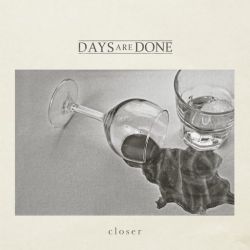 The debut EP from London-based Days Are Done, aka Emmy Kay and Adam Lewis, is as with most EPs a showcase for the range of their music. It will probably be classed as folk-rock by those that don’t know any better but in reality it’s slightly dreamy and intense indie-folk. Things kick off with On My Mind, an intense and powerful song with some fine violin playing and emotive vocals from the pair. The following Never Let You Go is upbeat and faster though the subject matter – the undying love of the narrator – is no less emotive and Lewis’s vocals in particular capture that perfectly. Colours has a fine melody but while the overall sound creates a haunting mood the song itself isn’t the most memorable. Which just leaves the closer You, the most heavily instrumented track which boasts a big sound and more great harmonies but again the song is the weak link.

Early days of course but the songs are the most important thing for any release. A notch or two up in that department combined with the sound they’re already perfected and Days Are Done could really make their mark.