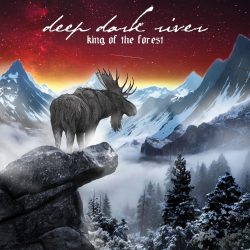 Self-described as artsy, folksy, classical “Deep Dark River” are a Toronto based duo comprising Morgan Rider on guitar, piano, synth and vocals and Nathen Morrison on cello. “King of the Forest” is their second album, though the first for Nathen, and features seven original compositions for guitar, cello, piano and voice; and they do feel more like compositions than songs if that makes sense. By way of context their previous work includes an eponymously titled ten-track debut album released in 2018 and prior to that a cover of “Wayfaring Stranger” sung deep and dark a la Nick Cave.

The lyrical themes chime appropriately with the album’s artwork being about nature, wild places, creatures and beasts of the forest, that sort of thing. Surprisingly the promo blurb suggests “introspection” but there’s little evidence. None of the songs are written in the first person. None appear to be about the songwriter, at least not in any obviously discernible way. While they are very much about a relationship with the natural world, they’re not very much about the inner thoughts and feelings of a Canadian singer-songwriter. In a world awash with angsty self-analysing singer songwriters some listeners may agree this is rather refreshing.

Track one ‘Beneath an Ancient Sky’ is a two-minute instrumental prelude of what’s to come. It sounds hauntingly atmospheric and transports the listener effortlessly into a backwoods wilderness setting. If they’ve not done so already Deep Dark River should definitely explore sync opportunities. This track would make an awesome soundscape to a documentary about eagles soaring majestically above precipitous snowy mountain tree lines in search of small furry mammals. Just a thought.

Track two ‘Of Primeval Ilk’ continues with purposeful chordy fingerpicking guitar style, cello accompaniment and piano. Morgan Rider’s voice has a dry natural folkiness similar to Seth Lakemen as is the writing style. The cello accompaniment gives the sound a nice fluidity emphasising the drops and the major-minor chord transitions and the piano fills in the turn arounds. Melodies are functional to the telling of the story rather than being memorable or catchy until the more anthemic refrain “protector of the realms of old, rise up and take your throne” which lifts the spirit.

As we start track three, the single ‘Starfire’, we hear, well, more of the same really. It has to be said there is an unvarying consistency to these tracks that makes them indistinguishable. The tempo, arrangement, production, melodic devices, and to maybe a lesser degree the musical roots sound pretty much the same in every song.

Finally to track seven ‘Bloodied and Uncrowned’. The standout moment in this track is actually the ending which out of the blue introduces some cool percussion and electric guitar and a reverse reverb crescendo kind of effect right at the end. A nice finale for sure but it feels like the album ends just as they’re getting started. More charitably it could be sign posting the way forward for future collaborations. If that’s the case, and we should hope it is, the next album could be very interesting.

All told this album is rather one dimensional. Like a stripped back and slowed down version of some Seth Lakeman tracks albeit missing the virtuoso performances and blood banging energy. Compared to another recently released debut album such as Kelly Hunt’s ‘Even the Sparrow’ which is in a similar vein, the songs feel underdeveloped, lacking identity, underworked, underexplored. The guitar, cello, piano, voice format works very well but isn’t delivering it’s potential. With the exception of the last fifteen seconds of ‘Bloodied and Uncrowned’ there is very little creative effort in the arrangement or production.  There’s bags of potential here and the band definitely deserve a follow to see where they’re headed.

Haunting but unvarying odes to nature

About John Vaites 11 Articles
London based musician and music fan.