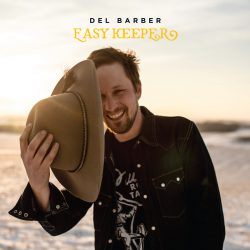 Too often these days, when an artist tries on the sound of the past he may get the music right – using all the proper amps, vintage guitars, analog equipment and such – and still not have anything interesting to put on top of it. Kind of like a hipster with a Civil War beard and suspenders who owns a vintage typewriter but who’s only capable of typing out Dick and Jane-level prose. So much posing, so little substance. It’s pretty simple: when your music and melodies sound like they could have been outtakes from the legendary mid-70s progressive country documentary, ‘Heartworn Highways’ – sitting around the kitchen table with Guy Clark, Rodney Crowell, and Steve Earle – your lyrics better deliver. Thankfully, Del Barber delivers.

‘Easy Keeper’ is the first album the JUNO-nominated Americana songwriter has recorded since relocating to an old farm near Manitoba (Barber hails from Winnipeg). The move suits him. The eleven songs here may have come from the pen of a Canadian, but they sound as natural as if they were born deep in the heart of Texas, falling right off the tongue of the likes of Robert Earl Keen or – more recently – Hayes Carll. To be sure, the tales and wordplay here don’t match the towering giants of the genre – whose could? But the heart is there, and Barber proves he has more to say than what kind of truck he drives, what kind of beer he drinks, and what kind of woman turns him on. ‘Easy Keeper’ is nothing new, but it’s nothing bad, and that’s good enough for an album that sounds damn good while it’s on.

Canadian Americana that scratches that Outlaw itch without pandering for it