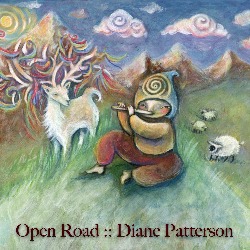 This album is what the world needs to hear right now. It is a healthy shot of solidarity, support and love. Many of the songs are a rallying call for change but are healing in focus, not overly confrontational. It’s all wrapped up in strong lyrics, a powerful voice and ranges musically from heartfelt acoustic tracks to funked-up, folky, latino beats. ‘Open Road’ is Diane Patterson’s fifth record. She’s been recording for 30 years and is an accomplished folk and worldbeat artist. Ani DiFranco (singer/songwriter/activist/poet) makes guest appearances throughout the album. DiFranco’s husband, producer Mike Napolitano (Peter Mulvey, James McMurtry), recorded and produced it.

The album’s opener ‘Rogue River Highway’ is almost prayer-like in construct: “May your journey be swift and safe, may your angels guide you well”. Patterson calls out to the elders of the land and to the trees to support refugees as they travel. There’s exquisite imagery here – the highway transforms into a band of light that weaves around the refugees and carries them home. Patterson’s voice is mesmerising and the rolling beat of the track gives a sense of travelling on the highway together.

‘Shape of your Sorrow – Orlando’ is Patterson’s response to the 2016 shooting in Pulse nightclub, Florida. It begins as a hauntingly quiet, yet powerful question around grief and sorrow as we are asked “What is the shape of your sorrow?”. Acoustic guitar is overlaid with delicate vocals and gorgeous backing from DiFranco. The two voices build together as the lyrics become more accusatory and call out those unable to separate hatred from fear and ignorance: “Was your hand on the trigger too?”. With the ongoing US gun debate and the recent Parkland shooting, this is sadly a song that is all too current.

Every song feels like its calling for something, be it change, peace, rain or revolution. Patterson makes you want to be involved because in her world we can bring about change. ‘Eagle Feather’ is a funky, folky example of this. It’s a positive, colourful song filled with calls to follow dreams, shoot for the skies and join as “peaceful warriors”. At the other extreme there’s ‘If there are Words’. This is a beautiful and simply arranged track. Stripped back to a slow-strummed, almost discordant double bass and Patterson’s rich vocal, the focus here has to be the words: “words have power, words have might”.

Patterson manages to deliver messages of hope and revolution in a very direct and spiritual way without becoming preachy or militant.