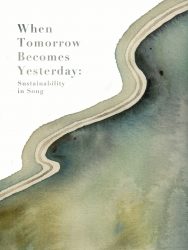 Singer-songwriter Jo Mango has teamed up with an array of songwriters, academic researchers and sustainability organisations to create the When Tomorrow Becomes Yesterday project. The project’s aim is to bring together academic, musical, artistic and practical knowledge to imagine a future in a more sustainable world. They have released three free download tracks along with a video documentary to help promote the cause.

When Tomorrow Becomes Yesterday is a project that ran over the past year and was a collaboration between myself (Jo Mango) and several wonderful artists from across the UK – Louis Abbott, Adem, and Craig Beaton. Louis and myself are from Glasgow, Adem from London and Craig Beaton is based in Sheffield. We’ve all been working on very different projects over the past few years – Louis plays with the band Admiral Fallow who released their third album last year on Nettwerk; Adem has been working as a film/TV composer (he wrote the music for the film In The Loop for example) and last year he released the first album of his solo music for a number of years (called Seconds are Acorns); Craig released an album last year under the name A Mote of Dust, previously he had been songwriter for The Unwinding Hours (along with Iain Cook – now of Chvrches). I have recently been working on a number of projects like this one – that use songwriting to try and explore our relationship to the environment and climate change, and released an EP in January (called Wrack Lines) along those lines. I also play in Vashti Bunyan’s band and got the chance to play with her again as she toured her latest album.
How would you describe your music?

The music that we created under the When Tomorrow Becomes Yesterday project is really unique. We’ve been meeting with climate change scientists, sustainability experts and urban planners interested in planning for a climate-changed future around the country (in Edinburgh, Manchester and London) and trying to channel all the thoughts about the future that this has inspired into songs. The songs marry all our very varied influences into a kind of haunting, alternative folk look into the future. We tried to channel sounds that explore time (since we were thinking about the future) so there are nods to circular Indonesian Gamelan rhythms, shifting time signatures and African instrumental sounds, as well as American folk structures and pretty honest lyrics. It’s a very fragile and personal reflection on the vastness of the earth’s future.

Can you tell us a little bit about your influences?

We all have such varied influences that’s a very difficult question! For me I’d say I’ve been very inspired by musics related to Old and New Weird America (both waves of folk revivals focused around Harry Smith’s Anthology of American Folk Music). It’s hard to speak for all of the rest of those involved in the project, but I guess I can say that Adem certainly draws a lot of inspiration from electronic music (his side project Silver Columns is a case in point) as well as post-rock and various English folk and experimental music influences. Craig cut his teeth in alternative rock and indie bands on the Glasgow music scene but is also very influenced by film and film music. Louis also grew up in the Glasgow indie music scene (he’s played with numerous bands including King Creosote, Rachel Sermanni, Kris Drever) and draws a lot of inspiration from classic American singer-songwriters and Scottish folk influences also. He’s also a great drummer and percussionist and he throws that into the mix too. (I hope I haven’t misrepresented them in their absence!)

What are you currently promoting?

We are currently releasing a fantastic film that was made about the process of writing the songs, and that includes footage of performances of songs in Manchester Museum and next to a pond somewhere in London (under a flight path!). We’re also giving away downloads of the live recordings of the tracks. They are all free to access, and you can watch the film here: https://vimeo.com/171195947

Have you got a particular song you’ve done that you’re particularly proud of, one that might define you?

From this project, I think the song “The Ceasing” means a great deal to me. At the beginning of the year I had a really brutal time personally – I lost 3 close family members in the space of three months. So when it came time to meet all the climate change/sustainability experts and try to think about the future, I was finding that really difficult – because the future seemed like it belonged to loss and losing the people I loved. And I guess that’s really at the heart of why so many of us find it hard to plan for the future far ahead, or to want to really truly imagine the disaster that the future might be if climate change continues the way it is. It’s because it’s a future without us and the people we love in it. Or that’s how it seemed to me at that time. So Louis and I sat down and had a really truthful and honest songwriting session, and The Ceasing is a really beautiful thing that emerged. It’s been a strange comfort to me to be able to play it.

What are you currently listening to?

I can’t speak for the others, but I’m currently listening a lot to Marika Hackman’s album We Slept at Last (which I only just discovered) and I’m still soaking up Joanna Newsom’s album ‘Divers’. Judee Sill’s music has been a comfort to me recently too (The Kiss, for example – extraordinary!)

And your favourite album of all time, the one you couldn’t do without?
That’s totally impossible!!! It’s ever changing (and so it should be I think…).

What are your hopes for your future career?

I’m hoping that we can get the When Tomorrow Becomes Yesterday project songs recorded in the studio and perhaps combined with the songs that were written for the Wrack Lines project (which was long the same lines, and involved Rachel Sermanni, RM Hubbert and Pictish Trail too). I’d absolutely love to take all these beautiful people and songs on tour – what a kind of roving revue that would be! We’d have to find an environmentally friendly way of doing it though.

If money were no object what would be your dream project?
Oh, the tour I just talked about would be wonderful. I’d also like, one day, in a dream probably, to record an album with an orchestra – a really expansive and full sound. That would be a total dream.

What’s the best thing about being a musician?
Sitting down with an instrument and perhaps a friend for an afternoon and by the end of it, there being something that didn’t exist before present in the world. And that pindrop moment of silence and connection with an audience. There’s nothing that beats it.

Finally, have you anything you’d like to say to the readers of Americana UK?

Thank you so much for reading this far because you take an interest in new music. You are the type of person who makes the music world worth living, you truly are.