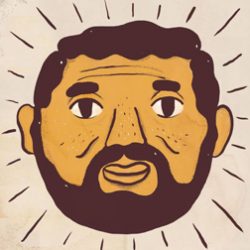 Antonio Gramentieri has worked with a host of Americana favourites from Howe Gelb, Richard Buckner and the Friends of Dean Martinez. If you blend those together, add in an Italian view of life (I like to think of Inspector Montalbano) and a dose of noir, you get a sound that is at once Mediterranean and universal. There’s a mix of louche instrumentals like Il Turco that’s like an ill-advised drug fuelled tour of a souk, sardonic stories like ‘Sera’ narrated by Hugo Race and then strange little twisted slices of seedy europop like Baballo. A complete stew of styles all slightly skewed into Gramentieri’s worldview.

There are constant left-turns so you never know what the next track will throw up. The tender gentle bucolic folk of Alma gives way to the gypsy dub of Soukana – it’s the kind of record that does its best to exhaust your vocabulary, you don’t know if you’re going to get Sergio Leone or Sergio Mendes, either is a possibility. There’s a kind of menace hanging over some songs where a wrong inflexion could lead to carnage al la Gamorrah.

It’s a rich brew with pedal steel, banjo, saxophones, clarinets, accordions, all manner of percussion flute, dobro and anything that can be used to create atmosphere because that’s what the songs do. They create a mood, whether it’s the after dark murmurings of Lontana or the 60’s TV theme jazz of Mestizo. It has a distinctive aesthetic located somewhere between Calexico and the Balkans, a thrilling chase down darkened alleyways without any idea of what lurks around the next corner.

Returning from holiday in Southern Europe, here’s the music you didn’t hear but should have