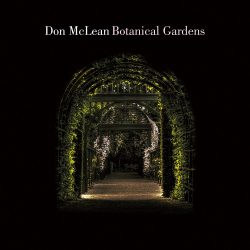 Is it possible to review any release by Don McLean without reference to the past and how long it has been since those classic songs that made his name? The answer, of course, is absolutely not. The curse of providing the world with classic songs is that everything will subsequently be compared to them. ‘Botanical Gardens’ is McLean’s 19th studio album and his first in eight years.

Offering a reflective and often wistful vision of days gone by McLean cites his inspiration as the gardens he walked in near the opera house in Sydney. Musing that he came to see the gardens as a metaphorical heaven, with associated death and rebirth, the whole album, according to McLean, revolves around that thought.

That said, many of the songs cover love in all its guises and they come wrapped in a glossily produced Nashville package that gives us old fashioned country, honky-tonk, rock & roll as well as the folky balladeering with which he made his name.  Songs like ‘Rock and Roll Baby’ and ‘The Lucky Guy’ are just plain celebrations of that boy/girl thing with accompanying lyrics that stand out, unfortunately, for all the wrong reasons.  “You’re a ching-a-ling with a diamond ring” from the aforementioned ‘The Lucky Guy’ or “When I think of little things, there is a little bell that rings” from the piano led acoustic ballad of ‘You’re All I Had’ do not enhance the reputation of an artist with such a highly regarded back catalogue.

McLean rights these lyrical wrongs with the bitter diatribe that is ‘Ain’t She a Honey’, a song one would suggest aimed at his ex-wife who, after a very bitter and public divorce, left with a $10 million settlement. By way of balance the next, and probably best track on the album, ‘The King of Fools’ sees McLean drop the Mr Angry persona and take a much more philosophical and critical look at himself with what feels much more like a lament to the love lost. There is a real mix of styles on album and it may or may not be a coincidence that the crooning style he adopts on songs such as this tend to be the stronger tracks.

The album has its merits, not least the slick and professional musicianship on show, but it is destined to remain under the radar with regard to a career retrospective.