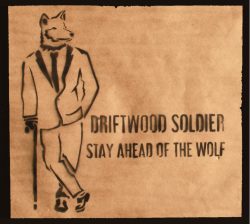 Describing themselves as “Gutterfolk for the masses” this duo from Pennsylvania may have created a new category of Americana. If by ‘Gutter’ they mean sticking up for the underdog, that looks right. And in its context of absorbing stories ‘folk’ is accurate too. Whatever, Driftwood Soldier draw from their personal experience to a broader observation of injustice. Sonically they are on the verge of combustion with vocals that rasp their lyrics and around mandolin, bass and foot percussion their sound redefines stripped back. At times their force overwhelms but Driftwood Soldier certainly leave a lasting impression.

What most defines Driftwood Soldier is Owen Lyman-Schmidt’s voice. Whether he is singing or speaking in his spooky semi-announcer tones he conveys fury, emotion, love and desperation. There are times when you almost scream back at him to stop but his purpose is not to make a polite point but to shock. Lyman-Schmidt’s mandolin playing comes at a similarly frenetic pace. Bobby Szafranski’s bass lines keep order as do their respective percussion contributions. Tom Waits comes first to mind then Leonard Cohen and Nick Cave.

Lyman-Schmidt lures the listener into the record with ‘All My Friends’, opening with his barely audible picking then he breaks into a haunting, “all my friends are falling like leaves”. Sparse banjo and bass add to the pathos as he builds momentum in both tempo and intensity.

‘John Henry’ is a new song about an old theme. Driftwood Soldier cleverly bring the old story of John Henry’s pick versus the steam drill up to date. The racism stays but the steam drill is replaced by contemporary corporate greed. Lyman-Schmidt comes very close to exploding.

Driftwood Soldier lose none of that potency in the slower tracks. ‘Marietta’ tells of a man left stranded after a car crash in remote Wyoming. It is a song about loss as the relationship that made him stay did not meet his unrealistic expectations.

The tension does not lessen when Lyman-Schmidt switches to his spoken voice style in ‘Topeka’. The story begins with his “emptying a half pint of rum”, was interrupted by a three legged dog called Topeka warning of “an impending violent confrontation”. Again, he plunges into a completely absorbing tale of corruption and injustice.

But outrage is what Driftwood Solder do best. As a title, the album’s only cover, Greg Cartwight’s ‘Banker and a Liar’ offers much scope which Lyman-Schmidt maximises. He excels in melding emotions, “your prophet is a banker and a liar” is primarily anger but also pity and scorn. An edgy fiddle line adds intensity to Lyman-Schmidt’s vocals as together they pursue the target of their ire culminating in a howl of protest.

Live is the way to get the full Driftwood Soldier experience but put on this record, stop what you are doing and let them pull you into their world. That basement dive bar feel beckons.