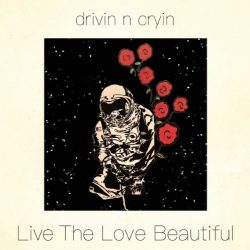 Not seen since 2009’s ‘Whatever Happened to the Great American Bubble Factory’, Drivin N Cryin are back with a powerful and accomplished album produced by Aaron Lee Tasjan. The album, ‘Live the Love Beautiful’ is a great rock album, edgy with punk in places, steeped in fantastic melodies and insightful lyrics. It feels like an album that should be heard live. Hell, it feels like an album that is live. This is testament to Tasjan’s production approach as many of the songs were recorded in a series of live takes at Welcome to 1979 Studio in Nashville, Tennessee.

American anthem ‘Free Ain’t Free’ opens the album with front man Kevin Kinney part snarling, part talk-singing his way through the track. All’s not well in the land of the free and Kinney demonstrates the decline of the American dream with the song descending into a frenetic, punky scream-fest.

However, the album doesn’t dwell on everything that’s going wrong; instead it takes us down a more personal journey of reflection. From remembering first loves to working a way out of addiction, the memories are treated respectfully and the result is some delightful southern ballads and folky story-telling.

Memories begin in ‘I Used to Live Around Here’: it’s easy to visualise Kinney wandering around his old haunts as he sings of them with affection and an edgy swagger: “I used to live around here…I used to play in this bar”.

In ‘Step by Step’ Kinney explores the way out of addiction, the use of the organ in this track makes it feel almost like a religious confession, but it’s ultimately uplifting and melodic. Kinney shows vulnerability as he sings “always an excuse for my addictions” but ultimately recognises he just needs to take “one day at a time”.

Drivin N Cryin don’t want us to get too complacent and forget their dive-bar rock roots. ‘If I’m not There, I’m Here’ is an aggressive guitar-led track that descends into psychedelic meltdown with reverberating vocals, racing drums and a full-on rock out crescendo. ‘Spies’ wouldn’t sound out of place on a Rolling Stones setlist and Kinney does his best Mick Jagger snarl throughout “I’m a spy, for the underground, in America”.

‘Ian McLagan’ is in homage to the Small Faces and Faces’ keyboardist who died in 2014. It’s a memory of Kinney seeing McLagan lugging his kit down a lane in the rain. It is successfully reminiscent of McLagan’s music with gorgeous layers of harmonica and mandolin.

For a band formed decades ago with a sizeable gap between recent records, ‘Live the Love Beautiful’ feels like a classic already. It’s fresh and vital and most importantly sets a powerful direction for the band. Don’t leave it so long next time, Drivin N Cryin.

The Land of the Free, mixtapes and love: dive-bar rockers are back with a surprisingly multi-layered album