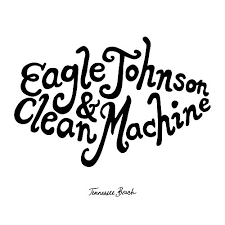 Faecal Microbial Transplant. There. I’ve said it. I’m not saying that this debut album from Eagle Johnson & Clean Machine is shit. In fact, the opposite is true: it’s excellent! It’s just that when I say I have a gut feeling about this band, it reminds me of the feeling in his gut that Jeff Leach, anthropologist and founder of the Human Food Project, and American Gut, experienced whilst out on a field trip with the last hunter-gatherers on the planet – the Hadza of East Tanzania. Now, some might say that East Nashville, where Eagle flies, or East Tanzania, ain’t that different in their own sweet, way. They’re both pretty wild. Ask Todd Snider! Anyhoo, engaged with his quest to research the human microbiome, in his enthusiasm, out in the bush, Jeff scooped up a steaming pile of fresh poo, deposited by one of his Hadza guides, with a turkey baster and fired said ca-ca deep into his own rectum and gastro-intestinal system.
Et voila: the faecal microbial transplant (FMT). Push, push in the bush, as Musique used to sing. Jeff, you see, believes that microbes matter, and that they have an influence over all parts of our body, including the noggin. So when you say you like something, like the impressive selection of songs on Tennessee Beach for instance, it may actually be the microbes in your gut that dig it, not you. Being nomadic hunter-gatherer’s, who only eat what they can forage or hunt, the Hadza have unique colonies of microbes in their guts that our Western namby-pamby guts, weakened by years of Mickey D’s and delicious processed food like Fruit Loops, Pop Tarts, Rustlers Microwave Burgers and the blessed and most holy Layers Of Joy are lacking. Yum yum, gimme some, as the Fatback Band used to sing so gloriously.

Jeff Leach may have been wishing for a machine to clean him when the faeces began to trickle down his thigh, after he stopped lying on his back and cycling upside down, “to try to make sure my new gut ecosystem stayed put inside me,” but had Eagle Johnson & Clean Machine been there in East Tanzania with the American Gut specialist, they would have tickled Mr. Leach’s fancy with their upbeat selection of garage tunes and “raw, left-of-centrerock’n’roll”.

The Clean Machine are a tight band, who dig rockin’ out with a soulful vibe and who seriously kick ass, like they’re all wearing size 12, steel toe-capped Doc Martens. Not to mention the fact that Eagle has been blessed with a voice that conveys a swagger, a gutsy, self-assurance that’s kinda like a melange of Kid Rock, Mick Jagger and Jim Morrison rolled into one. His confident demeanour belies the six-months he spent sectioned in a mental institution “under observation” after a foolish, youthful indiscretion – caught breaking into a church and the subsequent encounter with the Florida Department of Corrections. Eagle put the time he spent incarcerated to good use, practicing his guitar and writing the songs on this album. He was a changed man when he came out and his writing displays a reflective aspect and hard-won maturity.

His raucous cut Killer with its ‘he was the coolest guy, they called him Killer’ chorus is as hooky-as-hell and I assume is a tribute to Jerry Lee Lewis, and hopefully not about one of the bad-asses Eagle met whilst locked up in County.

Like so many musicians before him Eagle moved from Florida to his spiritual home in East Nashville. A place that has provided even more grist for Eagle’s writing mill. I don’t think the cut Cookin’ is about something Eagle noticed on MasterChef. As Snider once sang ‘East Nashville skyline/ crossing over to a state of mind/ leaving all my troubles behind/ that old Cumberland River/ East Nashville skyline/ discount cigarettes, liquor and wine/ anywhere, anytime, we deliver’. There’s a hilarious chapter about life in East Nashville in Snider’s book, I Never Met A Story I Didn’t Like called Play A Train Song. Laugh? Like Jeff Leach, I’m still rinsing out my underpants.

Speaking of which, faecal microbial transplant has been used successfully as a treatment for Irritable Bowel Syndrome, according to the British Medical Journal. You thought I was making this up, didn’t you? You can find further nuggets of wisdom in Leach’s fascinating book Rewild or his website: https://humanfoodproject.com. Apparently FMT is now quite a common treatment for corpulent hipsters and influencers seeking weight reduction in Hollywood. Crudely speaking, thin people have different colonies of microbes in their gut to fat people. Transplanting the faecal microbes from the svelte to the morbidly obese has had remarkable results. The empirical evidence demonstrates that it’s an efficacious treatment for rapid weight reduction. There are big bucks in big doodies.

Being a big, bearded bear of a man myself, with a bellicose beer-belly, I’ve been thinking about trying to lose a bit of poundage for a while, especially after stuffing my face over Christmas. Eagle, I see that you’re rather on the slim side, yourself. Would you be willing to donate a fresh dollop of your poo? The faeces must still be warm at time of transference, to ensure a successful colonisation. It’s for a (reasonably) good cause. Just say the word, dude, and I’ll come round with my turkey baster.

Whatever your thoughts on the merits of faecal microbial transfer, there’s no denying, that right now, Eagle Johnson & Clean Machine are hot shit!