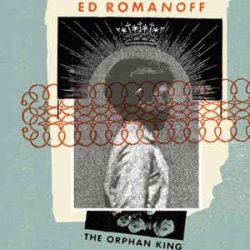 Ed Romanoff is a storyteller, his songs vehicles for the narratives, and stories we get whether they be ghost Miss Worby’s Ghost, the freak show Elephant Man, crime The Ballad of Willie Sutton, and of course at heart all of these are love songs. Along with the switch of genres the songs also meld into other genres from the basic folk beginning, so A Golden Crown throws in some Celtic fiddles and elsewhere there are snatches of gospel, blues and some country soul. Knitting it all together is Romanoff’s deep vocals that inhabit his characters and keep everything centred.

The straight out love songs are often the most simple and direct and the most successful. Without You (not that one) is a simple affair just guitar mandolin and bass with harmony vocals; it’s a timeless piece, with no need for ghosts or boxers. Less Broken Now sounds like Howe round about the time of Love Songs, which is fine, the backing vocals from Cindy Mizelle powerful and the introduction of the trumpet making it sound a little like Calexico are getting in on the deal.

The crowning glory is the closing Coronation Blues that moves towards the political: the narrative voice seems like a thinly disguised Trump, and the vocals and music turn a little ugly. The song builds with a simmer of guitars and fiddles that threaten to get out of hand, especially half-way through when the guitar slips the leash and runs off. The song is similar to Those Bastard Souls, the soaring guitar and the patient banjo making for great bedfellows. A solid and unspectacular release.

Another fine effort from late developer