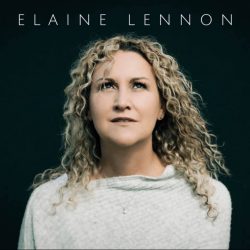 A highly-anticipated debut album is a phrase that is all too common these days. But to say this album is anything but that is truly an understatement. Nashville Songwriters’ Association International 2019 ‘One To Watch’, Elaine Lennon’s debut self-titled album is one she hopes will be strong and impactful and help her music career keep kicking on.

Elaine tells us that she wants to write the songs that she wants to listen to and I think we all want to listen to more of this style as well. The album is difficult to define, for it fits many different genres, from folk and Americana to jazz. This mix of styles is exemplified in the song ‘Trouble’, which has a really strong bluesy vibe as well as a real swagger to it, especially when she almost pleads for help: “I’m in trouble, trouble”.

What is great to hear throughout the album is a piano, something you rarely here in Americana music, and it enables more of this jazz feel, as does the beautiful love-story song, ‘Next Friday Night’. The lovely background piano combined with the great violin melody makes for an impressive start to the record.

Her comparisons to other artists don’t go unmerited, with the jazz and bluesy vibes of ‘This’ creating an Adele and Duffy vibe, with it almost mimicking the intro to Duffy’s song ‘Mercy’. But we don’t just get the slow jazz; we also get upbeat songs such as ‘Little Bird Little Sailor’, which stands out with a fun and jazzy background tune compared to the slow jazz seen in the others.

But by far the best song on the album is another one of the slower numbers, ‘In Songs We Live On’. On first listen, the song seems a bit similar to some of the others on the album, except for the interesting old-timey piano sound in the background which makes you start to ponder that perhaps there is more to this song than first thought. That interesting piano is in fact authentic 1960s jazz piano recordings of her uncle, which go perfectly with Lennon’s brilliant vocals. Rather than being just a great song, once you know the back story, you can’t help but appreciate the artistic link between old and new.

Overall, whilst this album is excellent for a debut album, it possibly has only 4 or 5 songs which really stand out, with some of the other numbers sounding quite similar. Yet what we still get is a new sound in the Americana scene, and that must be praised, showcasing how you can gain influence from all sorts of styles.