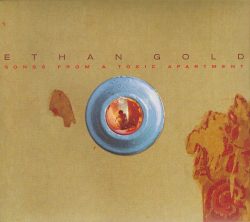 As the title for this album might already suggest, if you’re looking for some music to get a Saturday night party underway this is not going to be your first port of call. “Songs From a Toxic Apartment” is not easy listening in any sense of the term. When you read Ethan Gold’s backstory it’s not surprising that this collection of songs is particularly bleak. He’s the son of American novelist Herbert Gold and Melissa Gold (nee Dilworth). They divorced and Melissa died in the helicopter crash that also claimed her boyfriend, rock promoter Bill Graham.

Ethan has a twin, Ari, who is a filmmaker. While working on a film score for Ari, Ethan sustained a head injury in a freak accident and this left him unable to speak or do complex tasks; quite a gruelling set of circumstances. What’s not entirely clear is when, in this unfortunate chain of events, the songs for this album were conceived. What seems apparent when you start to look into this album, is that it has actually been around for a while and that its upcoming release, on the 24th November, isn’t its first release but its first appearance in the European market. Quite why Gold has chosen this point in time to give this recording a European release isn’t clear, though there is, apparently, a new album scheduled for release next year.

“Songs From a Toxic Apartment” is an odd selection of songs that vary from singer/songwriter confessional through to synth-pop without ever really offering a coherent view of the artist or his take on life. The songs themselves are frequently very good and well delivered – Gold is a man who clearly has talent – but they do sound like songs from another era and this just adds to the confusion about when this album was originally conceived and put together. Research suggests that the original recording was made some six years ago but it sounds even more outdated than that on many of the cuts. There are elements of early solo Lou Reed as well as tracks that call to mind Talking Heads and Television alongside tracks that are in firm shoegazing, bedsit territory. Perhaps the best description of this eclectic collection would be Art-Rock.

Though there are acoustic elements to many of the songs I don’t think the album would find a home with many Americana fans, having too much reliance on synthesisers and pop production but it is a good collection of songs, if more than a little downbeat. Interestingly nearly every track on the album is available on YouTube with its official accompanying video and, if you’re interested in Ethan Gold’s work, this would be a good place to listen to these songs. Like many musicians who work extensively on film scores, Gold’s music makes a lot more sense when you see his visual images that accompany it. In many ways Gold’s music needs a visual element to make it really accessible.

As a coherent set of songs this album is something of a disappointment but, if it’s a scene setter for next year’s planned release it could be the herald for a very interesting album indeed. Will the real Ethan Gold please stand up!

A good collection of songs that seems oddly out of its time.