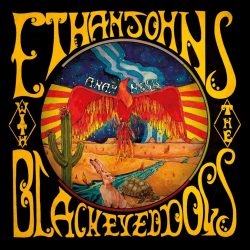 han Johns is one of the fathers of Americana given his production of so many classic albums in the genre over the years, including Ryan Adams’s ‘Gold’ and albums by Ray Lamontagne and The Jayhawks to name just a few.  Of course, having a Dad who produced the first Eagles albums starts you off in one of the best possible directions in the business. He is, however, not that well known for his own releases which have in many instances fallen under the radar despite the fact that apart from knowing how to produce, he can write great songs, play many instruments and importantly he can sing.

This new release is nothing other than epic comprising two CDs and if you want the album you will have to buy a physical copy as this will not be available digitally, a stance against this culture and the issues it causes artists getting their just rewards.

The album was recorded effectively live over a two week period in Johns’s own studio at the end of his garden with The Black Eyed Dogs a group of four musicians who have all had their part to play in the final production of the work – quite a call from one of the best producers of his age. Being a proper record a running order has clearly been suitably considered which in itself leads the listener on a journey. After a musical introduction the album kicks off with ‘Runaway Train,’ a rollicking piece of fun which is then followed by ‘Ruskin’s Farthing’ a piece referring to a court case against the nineteenth century critic John Ruskin where a farthing and no costs were awarded in damages. As can be imagined, this is not a standard subject for a piece of Americana music but the fact is that Johns delivers the song so well. ‘Leaving It All Behind’ has a fantastically catchy chorus whilst ‘Twenty First Century Paranoid Blues’ speaks to us all.

The record has an organic feel with songs certainly not being rushed and encouraged to find their natural end. Indeed, many tracks exceed eight minutes and the majestic closer comprising three songs rolled into one ‘Caught Up In The Hard Times’ / ‘Only One’/ ‘The Wedding’ builds into a manic finale rounding off the work brilliantly. This is a terrific record oozing with the heart and soul of Americana.