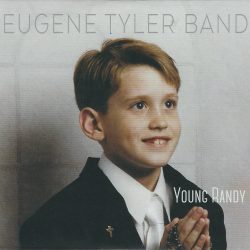 “Young Randy” is the new album from the Eugene Tyler Band – but who, exactly, are the Eugene Tyler Band?! The review copy of the album came with no accompanying information and no info on the album cover itself, beyond a track listing and the fact that it’s produced by Marc Jaffee for Cold Folks Home Records.  Even the band’s own website and Facebook page isn’t particularly forthcoming about the band. It’s possible that they’ve decided to let their music do the talking. If so, it’s a very astute decision, because the music is very good indeed!

It would appear that the Eugene Tyler Band is a duo at its core – Eugene Gardner and Danny Tyler, that they hail from the North East of America, Suffern in New York, and that this is their second album. Not much more information seems readily available but what we have here is a very accomplished recording from some excellent musicians. It’s also a very clever album in its construction, offering an enticing mix of stripped back acoustic tracks, full on rocking numbers and even some very well arranged string section accompaniments on a couple of the songs. The musicianship throughout is so good that it’s particularly frustrating not to be able to identify individual musicians and assign praise where its due – but perhaps that’s what this group is trying to achieve; a band identity rather than single out individual performances. You can clearly here the two different main voices at work but it would be interesting to know who’s playing what, particularly with the guitar work as there’s some really excellent electric guitar playing on tracks like Drank and Good Moon along with top notch acoustic work on opener Clock and other tracks like Birds, which closes Side 1 on the vinyl version.

Stand out track is probably Short Ride, which has already had some sort of release from the album and can be seen on YouTube with a quite engaging video, which looks like it might feature the “Young Randy” the album is named after. This is a good track that really seems to encapsulate the band’s sound; easy going but underpinned with great musicianship. This is one of the tracks that features a string arrangement and it works very well, partly because they don’t over-use it. The track also has a killer abrupt ending. Any DJ giving this track a bit of air time would do well to pay attention all the way through.

One slight complaint is that the lyrics are often hard to hear properly – and this is unfortunate because the bits you can hear sound good; “You ain’t really down until even the dog thinks you’re an asshole” from Even the Dog. A lyric sheet would’ve been a good inclusion. But that’s just a personal preference, the simple fact is that this is a good album by musicians who clearly know what they’re doing. One to watch out for.

Excellent album from an enigmatic band.