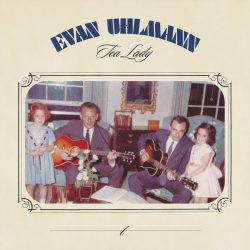 ‘Tea Lady‘ is the first album for 9 years by Evan Uhlmann, a 28-year-old Chicago based singer-songwriter. This self-penned record sits squarely in Bill Callahan ‘Smog‘ era territory, characterised by deadpan vocals, and mid-tempo arrangements, creating soundscapes, guitar-led, augmented by keys/synth, with lyrical themes around life, death and coming of age.

It’s a short album- eight songs – offering snapshots rather than stories, with atmospheric arrangements with a sense of ebb and flow rather than resolution, fitting comfortably with the conversational, sometimes stream of consciousness lyrical approach. ‘Dying Again’ suggests contentment with a process of life, death and rebirth, accepting the ordinariness of day to day life: “I think today went well / I’m higher than I’ve ever been / I fed the dogs at noon / And watered the plastic plants.” The songs’ arrangement has a suitably unsettling and vulnerable feel, with chilled strummed electric guitar and ethereal synthesiser leading to the refrain “It’s alright now/ I think I’m dying again”.

On ‘Prime’ Uhlmann sings “You snuck into my mind/but I’m lucky now / I think I’ll make it out alive” reflecting on younger years and times, with the melancholy chorus “Remember that time in our prime when we were just kids” placing the song in a youthful relationship.

A brighter musical note is struck with the more uptempo ‘Hallelujah Baby’, its guitar motif contrasting with the dark subject matter of drug abuse, while on ‘Body Escape’, a more optimistic take on life accompanies an acoustic guitar-led arrangement, as Uhlmann sings “Hey I love you like the stars and sun”.

The closing track ‘Bless You Babe’ reflects the view that life is characterised by uncertainty, but is still to be savoured, “I don’t believe in God / But you’re the reason that I pray / and I don’t believe in love / but I sure love the things you’re saying to me”, leading to the chorus “Bless you baby / and bless you babe”.

The album’s laid back production – by Uhlmann’s brother Greg, who also contributes guitar, bass and keys/synth – suits the songs well; other contributors include Tim Carr on drums and synth/keys, Dan Pierson on piano and Matt Carrol on drums.

A moody and atmospheric album that repays repeated listening to appreciate its virtues, rather than a ‘first heard/immediate like’.

Moody and atmospheric album that will grow on you