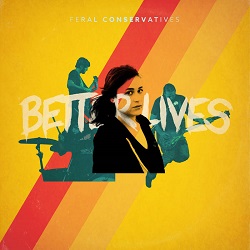 When your album has been produced by Jon Auer (Posies, second incarnation Big Star) then you’ve pretty much been anointed as a credible new entry into the legion of Power Pop bands. If you also have a female lead singer and a distinctive quirk – in the case of Feral Conservatives it’s that the mandolin is right there at the front of the band driving the tunes forward – then that’s a lot of flags flying in your favour. If, like Feral Conservatives, you also have a clutch of excellent songs then you’re flying.

Exhuberance – certainly, and on songs like Chimney Run the jangling combination of guitar and Rashie Rosenfarb’s mandolin creates a Jayhawks feel. Elsewhere there’s a tougher edge, songs that more than hint at getting out of a bad situation before it turns worse: Anymore has Rosenfarb making a low key summing up of a relationship “I’m not your punching bag or a door mat to wipe your feet” before steeling herself to move on with “you don’t own me anymore” before exploding out into the world as the band lets loose behind her. Five Guys explores the same territory, rebelling against patronising men, and at the same time being conflicted when it comes from within the family. After detailing all the put downs there’s still the assessment that “I got your impatience but I got your strength / and I think I got Mum’s sense of worth”. It’s a song that powers along like an unstoppable force. It’s not then such a great surprise when the most open love song on the album is the violin sweetened ballad Cat Song – a song full of images of warmth “late night home again and your glowing eyes wait up for me”. Songs about pets, like songs about children, rarely escape the saccharine – but this one, well if it were Danish it’d be hygge.  We’re never too far on Better Lives from the pounding drums of Matt Francis, the feedback squeal of Zach Jones’ guitar and the grounding of Dan Avant’s bass – Sippin’ Slowly is a raucous attack that bowls over any opposition and steam rollers through as gloriously unbound rock.

On Better Lives Feral Conservatives offer up a joyous melange of strength and weakness, love and hatred, and a desire to just reach for those better lives, those better loves, whilst also knowing that there’s a chance that it’ll be self sabotaged “one more chance / one more kiss / one more time I’ll fuck this up / I’m doing this all wrong / So the panic sets in”. Strength, weakness, arrogance, self-doubt : that’s the essence of rock, is it not ?

Virginia based band Feral Conservatives strive for success – and find it on Better Lives.