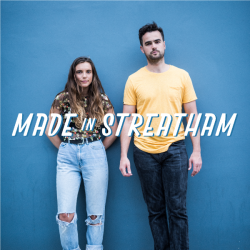 Ferris & Sylvester’s new EP Made In Streatham takes a bluesy twist on the indie folk singing and guitar picking, the five-track offering taking a different turn on the music fans heard on their first EP The Yellow Line. Their latest single from the EP Better in Yellow is a more uplifting song with the brass notes throughout bringing out the lively character of the lyrics.  It is clear to see why they were on BBC Introducing‘s In Devon Best of 2017 with this hit.

The song Sometimes stands out from their other tracks on the EP. It’s well written and performed but unlike the rest it has a more melancholy tone throughout it.  It makes the song different as it is driven by the lyrics with the music as a background accompaniment.

The EP as a whole is easy to listen to, with its homey vibes throughout; it isn’t hard to believe that the duo recorded the songs in their flat.  This gives the songs a personal touch and engages with the audience. The band might still be in their early days but with their great songwriting, vocals and instrumentals, it looks like they have a great future ahead of them.