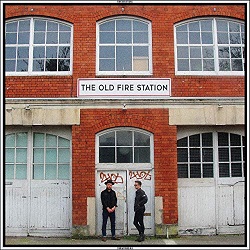 Bristolian siblin duo Adam and Lawrence Purnell have produced their first new recorded material since their initial release ‘The First EP‘ back in 2015. The six tracks on ‘Old Fire Station‘ powerfully show off their folk-rock stylings which are less Mumford & Son and more The Lumineers. ‘Faded‘ blends acoustic and electric guitar with Lawrence’s gruff lead vocal, softened by the harmony vocals that come in at the second verse. It’s a song questioning the direction life – and in particular a love life – may be going in.

And if there’s a sense of doubt in “I live life in a sunny day but I left that behind in a haze” then it is coupled with a youthful cockiness: “I might have had a woman or two / but the best ones they come back to you” – before finally kicking out with a defiant rejection: “you tried to save me but I’m gone / and I ain’t never coming back.” It’s three stages of rejection – “I’ll wait for you, you’ll come back, who needs you anyway?” –  encapsulated into four short minutes.

‘I’m your man‘ adds some soulful blues into the musical mix, a strut of a song offering a world of better sounding possibilities: “you don’t want to go to work – don’t go / if you don’t want to go to church – stay home” adding the priapic “forget praying with the people / baby I will be your steeple“. There’s a return to that Lumineers / Avett Brothers folk-rock sound on the racing and danceable ‘Say What You Want About Me,’ which celebrates just going out and trying, whatever the naysayers might want one to do. A good closer to the EP….except, listen on, there’s a stripped down acoustic version of the opening track tagged on at the end – a nice contrast to the high energy that has gone before.

Over six short songs making up ‘Old Fire Station‘ – one of which is a brief piano instrumental acting as an introduction that lifts the melody into a full song – Foreign Affairs show off their musical influences on a solid and satisfying second release.

Get ready to stomp your feet to the modern folk sounds of Foreign Affairs.