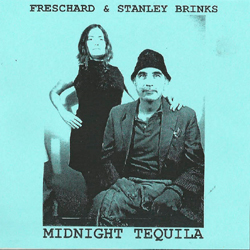 ‘Midnight Tequila’ is the second release from French chanteuse Clemence Freschard and the ubiquitous Stanley Brinks (who has reputedly released over one hundred albums) although the pair have collaborated on several projects over the years. With Brinks allied to the “anti-folk” NY movement and Freschard pleasantly naive sounding the songs herein have a deliberate simplicity, a strum along  and sing along quality along with some quirky lyrics and listening one is reminded at times of Jeffrey Lewis or The Colorblind James Experience.

Brinks has dallied with many musical styles which range around the globe and there are some touches of calypso and African music here and there on the album but in the main the songs could almost have been sung around a campfire late at night especially if the camp was in Greenwich Village. Brinks’ fragile vocals sit well with Freschard’s wispy tones with their duet on ‘Oh Boy‘ (not the Buddy Holly song) a particular delight but throughout the album they complement each other well.

Despite being fairly  simple concoctions songs such as ‘Going to the Bar’ (where nothing much happens as Brinks decides to go a drink describing some of the folk he bumps into), ‘Limestone’, a bit of a nonsense ditty and ‘Olives and Wine’, another unassuming bar song,  are all very pleasant to listen to. Bars do feature throughout and there’s a bit more heft on ‘What a Night’ which  seems to be about another boozy night but a bit of a calamitous one with the protagonist asking a woman, “Show me how you twerk” while ‘Success’ actually rocks out although it suffers from too much repetition of its chorus. Meanwhile ‘I’m the Boss’ adds some  exotic serpentine wind instruments as the pair engage in a very odd domestic dispute but despite the horns reappearance on ‘Africa’ the song comes across as somewhat hackneyed. They close with ‘Milestone’, an excellent and understated love song which unfortunately casts a shadow on its predecessors as it’s by far the best song here.

Pleasant enough but lacking in bite