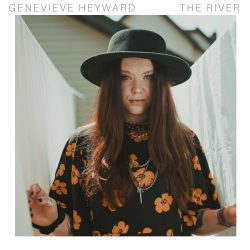 “We are like a ship of dreams / Cracked and leaking at the seams / Slowly floating down the river,” Wisconsin musician Genevieve Heyward sings lazily on the opening of her new EP, pulling us in and making ‘The River’ a current we’re pleased to be swept along by. The second track, ‘Love or Lust’, is a standout. Its feet are rooted firmly in classic country – Heyward’s vocals bringing to mind the likes of Patsy Cline – but the lyrics are perfectly suited for the Tinder generation: “I’ve been used up and believed every line / Is it love or lust this time?” she asks worn down by relationships that go nowhere.

‘Hurts So Bad’ showcases Heyward’s impressive vocals, her gravely tone is perfectly suited to the blues-rock influenced track, and the high notes remain easily within her reach. ‘Moving On’ is an earnest country ballad with lyrics that speak of an unhealthy codependent relationship: “Well I noticed you’ve been waking up at dawn / Making sure I ain’t gone / Well luckily you, you’re all I’ve got / One of these days we gotta move on.” The words “I overdosed, but you’re still shooting up,” feel especially cutting. The EP closes with ‘Sometimes’, a breezy track about making the best of what you’ve got, but it gives us the lyrics: “Why did you call in the first place anyway / I was busy scribbling hearts upon my face,” which weld to form a heavy blow towards the one they’re directed to.

To record this record, Heyward teamed with a number of Norwegian and American musicians who helped her build on the strengths shown in her debut EP (2018’s ‘It’s Not Like Anyone’s Listening’). With these new tracks, she shines with lilting vocals, sharply clever lyrics, and a distinctly country hued musicality that should be able to win over both traditional and more modern fans of the genre alike.

Great vocals and smart lyrics make this deserving of your time