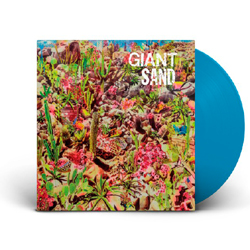 35 years after releasing their debut album, ‘Valley of Rain’, Howe Gelb and his Tucson based tearaways Giant Sand have only gone and re recorded the whole shebang and following on a clutch of shows in Germany, Sweden, Denmark and Norway they come to the UK and Ireland this week to let us hear how it’s sounding these days.

Recorded for only $400 dollars back in 1983 and released in 1985, ‘Valley of Rain’ featured Gelb, Scott Garber on bass and drummers Winston Watson and Tommy Larkins (who played on three of the songs). Gelb officially retired Giant Sand a few years back but songs from the debut album had been creeping back into the set as he wound up the band so eventually he and Tucson producer Gabriel Sullivan decided to redo the original sessions and amazingly, Gerber, Watson and Larkins were able to come back on board. And once again, they recorded over one and a half days and again spent only $400 capturing their sounds. With the original band playing on half of the songs, ‘Giant Sand Returns to the Valley of Rain’ will be released by Fire Records in August. In the meantime Gelb and his latest Giant Sand line up will be playing the album when they tour here starting tonight.